In a recent statement published on May 17th, the CC of the Communist Party of Chile points out:

“The reactionary right is seeking to remove from the Parliament Communist deputy Hugo Gutiérrez. It has appealed to the Constitutional Court, an entity that consists part of the current political establishment, severely discredited and lacking popular legitimacy and without democratic representation.

Deputy Hugo Gutiérrez has a long history in defense of human rights, which begins with the fight against the Pinochet dictatorship and continues in the 1990s and up to this day.

He is also a founding promoter of the fight for a new political Constitution, for a constituent assembly and based on popular sovereignty. He has been a promoter of legislative initiatives in favor of the people, their sovereignty and the district he represents.

The real reason for this persecution attempt is to deprive the Chilean people of a deputy who has always acted in defense of their interests. We warn that this right-wing action is part of an authoritarian plan; a broader, regressive and  reactionary plan of the right and its government which seeks to further reduce the few remaining democratic spaces in Chile.

Hugo Gutiérrez counts on his Party and the people of Chile in order to deal with  this undemocratic and spurious action”.

As a pretext for the dismissal of Hugo Gutiérrez, the Piñera governement and its right-wing allies have used a humorous sketch posted by the Communist deputy on social media.

Progressive political forces in Chile and Latin America, as well as Communist and Workers’ Parties from across the world, have condemned the anti-democratic persecution of Gutiérrez. 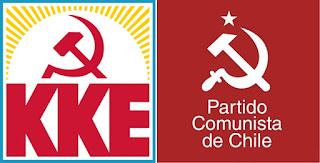 The International Relations Section of the CC of the Communist Party of Greece (KKE) had sent a letter of protest to the Embassy of Chile in Athens on February 5th, denouncing the persecution of Hugo Gutiérrez.

In a new statement published on Monday 25th May, the KKE points out:

“The KKE condemns the escalation of anti-communism, repression and persecutions against the CP of Chile, its deputy Hugo Gutiérrez and against the workers-people’s movement as a whole, as the events of May 1st and later showed.

The anti-democratic and baseless persecution of Hugo Gutiérrez, which aims to dismiss him, is not taking place because he posted a humorous sketch against Sebastian Piñera. This ridiculous excuse is just a pretext. Their aim is to terrorize the people and to send a message to the workers-people’s movement in general, which is that the government and the bourgeois state will resort to all measures, even in persecutions and violent crackdown, in order to subjugate the fair struggles of the people.

The anti-democratic persecution of Hugo Gutiérrez by the so-called Constitutional Court highlights the limits of bourgeois legality and the anti-people nature of bourgeois justice, as an organ for the defense of the interests of the bourgeois class against the people and their vanguard”.

The KKE demands that those who are responsible for the dozens of deaths and the thousands of wounded protestors, during the large demonstrations of the Chilean people in the previous months, must be brought to justice and punished accordingly.

“The KKE, with all its forces, will continue expressing its actual solidarity and support to the people and especially to the Communist Parties and Communist Youths of Chile, Venezuela, Cuba and other Latin American countries”.