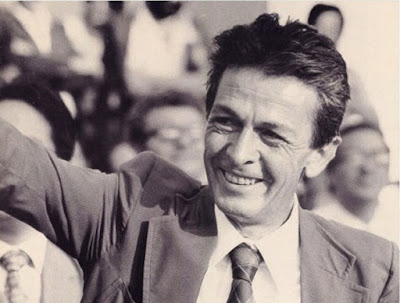 Everything begins in the period 1943-1947. Certainly, the way Palmiro Togliatti directed the post-resistance PCI (Partito Comunista Italiano) was undeniably adverse to the actual possibility of “making the revolution” in Italy, but as Pietro Secchia and others including Eugenio Curiel said: “between making the Revolution and doing nothing there is a big difference” and Togliatti’s critical appeal to the Italian way of Socialism (the results of which can been seen now) is all there.

Is Gramsci the forerunner of the “national ways to socialism”?

Is his conception of the conquest of “hegemony” and “war of position” the forerunner of the “long march in the institutions” that the PCI began at the time of the famous “turning point of Salerno”?

It is enough to read the pages of Gramsci in the original (text) to realize how Gramsci’s concept of the Party and the state has always been aimed at the conquest of political power.

But Gramsci is neither Togliatti nor Berlinguer.

In the thought of Berlinguer, an honest person who is “out of communism” (as understood by his theoretical-practical approach), some fundamental points stand out: the historical compromise, democracy as a universal value, Eurocommunism, the acceptance of NATO umbrella, the accession to the EU and, finally, the considerations on the exhaustion of the driving force of the Soviet Revolution.

Berlinguer’s reflections on austerity and the moral question do not have the same strength, nor can they, in any way, counterbalance their devastating effect. Objectively speaking, it cannot be denied  that Berlinguer also found himself “crushed” by a political body of the party in which  the so-called “miglioristi”* (from Amendola to Napolitano) had in their hands the Party’s vital, even economic ganglia (e.g. the world of cooperation), hence Berlinguer’s “solitary” presence at the gates of Fiat in 1980 and in the right struggle to defend the “escalator”**. Significant episodes which, however, appear to be irrelevant on the leading framework and a large party body in which the “genetic mutation” had already taken place and which Berlinguer didn’t want to oppose.

Let’s start with the historic compromise regarding the heroic death of the President of Chile Salvador Allende at the hands of Pinochet’s coup plotters hired by the U.S. Instead of simply stating that bourgeois democracy exists only if the bourgeoise is firmly in power, but when it woobles as in Allende’s Chile then the bourgeoisie herself renounces her own formal rules moving towards violent and terrorist methods, Berlinguer writes: “We have always thought that the unity of the workers’ parties and leftist forces is not a sufficient condition to guarantee the defense and progress of democracy…”. Berlinguer’s historical compromise, on the other hand, apart from the leitmotiv of “defense of democracy”, is not a social alliance of the working class antagonistic to the social blockade of the bourgeoisie, but a political alliance between the major parties at that time, the PCI, the PSI and the DC, the latter as a political expression of the great, private and state, bourgeoisie.

From a Leninist point of view, Allende’s mistake consisted precisely in not even trying to “break the machine” of the bourgeois state, but accepting it, relying on a parliamentary majority and in the loyalty of  the leaders of the state apparatus. It would have been necessary to develop strong mass movements in support of the new government, to create an armed workers’ militia, to change the institutional mechanisms, “decapitate” the leaders and modify the structure of the army, police, security services, economy ministries, with the mass introduction of trusted proletarian element. It would have been necessary, in a few words, to establish the proletarian dictatorship. Allende didn’t do it and the Chilean people paid dearly for this mistake. Berlinguer, as we know, ignored these considerations.

Eurocommunism, as a completely revisionist and opportunist theory and practice, originated from the meeting in Brussels on 26 January 1974 between Berlinguer and Spanish and French revisionists, Carrillo and Marchais, Secretaries of the respective Communist Parties, who espoused the theses on the value of democracy formulated by Berlinguer in this way: “This broad convergence… includes the recognition of the value of personal freedoms and their guarantee,  the principles of secular state and and its democratic articulation, the plurality of the parties, trade union autonomy, freedom of religion and worship, freedom of research, and cultural, artistic and scientific activities”. The passage quoted shows clearly how Berlinguer had adopted the typical categories of bourgeois thought, absolutizing them outside and beyond any historical context and class substance.

The interview with Giampaolo Pansa (himself!) in Corriere della Sera on June 15, 1976 marked the definite acceptance of the capitalist West and its deadly military alliance, NATO, finalizing the break with the socialist camp which, although infected by the germ of Khrushchev’s revisionism, was still the most formidable bulwark against imperialism. “… the Atlantic Pact can also be a useful shield to build socialism in freedom… I don’t want Italy to leave the Atlantic Pact. I feel safer staying here…”. And finally, always on this line, there is the famous phrase with which, in 1981, the “umbilical cord” with the history of the workers and communist movement was definitely cut: “… the propulsive thurst of the October Revolution has been exhausted…”.

Absolutely relevant is the strategic choice with which Berlinguer “marries” the process of European and capitalist unity, while the USSR and the socialist camp still exist. In the famous interview with Eugenio Scalfari, one of the destroyers of the PCI, on August 2, 1978:

Scalfari: “The PCI made a denifite european choice. Do you confirm it?”
Berlinguer: “I confirm it. We know that the process of the European integration is conducted by forces and interests still tied deeply to capitalist structures…. But we believe that, in any case, we must move towards Europe and its unity”.

I repeat, with all possible modesty: Berlinguer was an honest person, but this isn’t enough to be a communist.


Notes by the translator:

* Miglioristi: Members of the "right-wing" within the Italian Communist Party. The name derives from the italian verb migliorare (to improve), meaning that the wing's major aim was to improve the capitalist system from the inside, thus adopting reformist, social democratic policies and rejecting the possibility of a revolution. One of the group's leaders was Giorgio Napolitano, who decades later served as the 11th President of Italy, from 2006 to 2015.

**The term "escalator" (scala mobile) refers to a policy that provided authomatic wages adjustments for workers according to the cost of living. It was a method to increase wages as the prises rise, in order to maintain the workers' purchasing power even under inflation.