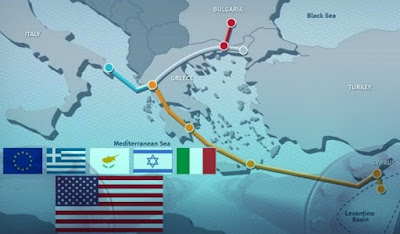 The agreement was submitted in the form of a bill by the Ministry of Environment and Energy entitled "Ratification of the Intergovernmental Agreement between the Republic of Cyprus, the State of Israel, the Hellenic Republic and the Italian Republic on a Pipeline System for the transport of natural gas from the Eastern Mediterranean to the European markets".

The KKE voted against and denounced the bill, exposing the content of the agreement and the euro-atlantic myths that accompany it, highlighting that it is an agreement that entangles the people even deeper into competitions to boost the profitability of business groups. The KKE also warned that the fact that the pipeline route is charted without having solved the problem of the delimitation of the EEZ triggers the aggression of the Turkish bourgeoisie and is far from guaranteeing the security and stability for the people and the sovereign rights of the country.

The Social Democratic Party MERA25 of the former SYRIZA finance minister G. Varoufakis voted against the agreement, as it expresses those sections of the capital that are oriented towards the so-called "green growth" of capitalism, preferring policies of abandoning hydrocarbons.

Marinos: The entanglement in the US-NATO-EU plans complicates the situation in Greek-Turkish relations

Speaking from the floor of the parliament, Giorgos Marinos, member of the PB of the CC of the KKE, noted:

"In practice, it has been shown that the strategy that serves the interests of capital is manifested both in the attack against workers' and people's rights and in the dangerous involvement of the country in imperialist plans.

This direction permeates the policy of the ND government and SYRIZA, as well as that of the other parties. That is why, despite any differences, an agreement is expressed on the central axes of capitalist management and the relations with the USA, NATO, and the EU.

Part of this policy is the agreement under discussion for the East Med pipeline for the transport of natural gas from the Eastern Mediterranean to Europe, through Greece and Italy.

The explanatory memorandum of the bill and the positions of the rapporteurs of the other parties conceal the real elements of the competition for energy resources and pipelines. But there are two ongoing imperialist wars in the region, in Syria and Libya. In the Eastern Mediterranean, the US, EU, Russian, and other deployed military forces are moving with a specific plan.

The claims of the Turkish bourgeoisie are escalating and the unacceptable Turkey-Libya agreement, which is moving in geographical coordinates that are adjacent to those of the East Med, is being used.

These developments are of crucial importance, they involve a lot of dangers. In practice, it has been shown that the stronger our country's involvement in imperialist plans with the USA, NATO, and the EU, or the agreements with Israel is, the more intense the competition and the more complicated the situation is in Greek-Turkish relations. This is proven in practice.

I will cite another example that supports this conclusion. The government is involving the country in the EU "Peace" operation in Libya under the pretext of keeping the arms embargo and at the same time that the war is raging, Turkey is supplying arms to the forces of Sarraj while Egypt and the United Arab Emirates to Haftar.

Ladies and gentlemen of the government,

You are charting the route of a pipeline without having solved the problem of delimitation of the Exclusive Economic Zones, which may trigger tragic situations.

Both ND and SYRIZA promote their cooperation with the state of Israel, which murders the Palestinian people and prepares for new annexations of Palestinian territories with the support of the US.

You ignore the reactions of the Palestinian Authority and Lebanon, which denounce the Israeli violation of maritime zones, while this practice gives an alibi to the provocative attitude of the Turkish bourgeoisie that follows the same practice of violation.

You welcome the strengthening of the US presence in the Eastern Mediterranean based on the East Med Act used by US imperialism to expand its activities in a race of confrontation with Russia and China.

The East Med pipeline moves in the general framework of reducing the EU's dependence on Russian gas, Russia reacts and you degrade the fact that immediately after agreement on East Med in January, the bourgeoisie of Turkey and Russia responded with the inauguration of the Turk Stream pipeline, which seeks to transport Russian gas to Europe.

You count Italy as a partner, but the Italian government is flirting with China, Russia, and Turkey.

The tangle of imperialist contradictions and antagonisms is very complex and simplifications lead to an impasse.

Regardless of the possibility of solving the technical-economic problems of East Med, it is certain that the pipeline will be in the service of the interests of energy groups and construction companies and will entangle Greece deeper into imperialist confrontations, increasing the risks.

This is the true picture, and the KKE's positions are confirmed by the experience of energy pipelines that have been the source of imperialist interventions and wars in Syria and other countries. While in Cyprus, the presence of the US Exxon Mobil, the French Total, and the Italian Eni, which have now suspended drilling, not only did not solve the problem of the Turkish occupation but complicates the situation and there are ongoing bargains with Turkey.

The KKE's positions are also confirmed by the experience of the TAP pipeline for the supply of gas from Azerbaijan to Europe. You promised the moon for the TAP pipeline, but the benefits for the people are non-existent, energy poverty remains, and popular families pay dearly for electricity.

The same goes for East Med and the reason is well known. Wealth resources are in the hands of monopoly groups and the bourgeois state as well as its governments serve the big interests. Utilizing the country's productive potential requires radical changes, organization of the economy and society based on popular needs rather than capitalist profit, international relations based on the joint benefit of peoples, and disengagement from imperialist alliances.

The KKE calls on the people to judge with strict criteria and utilize their experience, to escalate the struggle for their rights, for the disengagement of the country from imperialist plans, and to lay a solid foundation to be master of their own land."