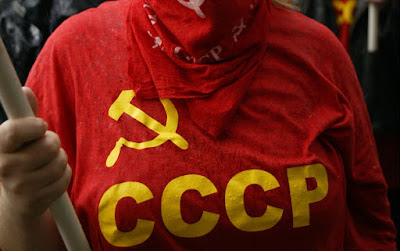 An example of despicable anticommunism is the recent initiative of the Lithuanian right-wing businessman and MEP Antanas Guoga who, alongside 26 other members of the European Parliament, appealed to Amazon's boss Jeff Bezos asking him to stop selling items with the sickle and hammer!

In their letter to Bezos, the 27 MEPs reproduce the known anti-historical, filthy anticommunist lies about the supposed "bloody actions, terror and inhumanity of the Soviet regime" which led to... "more than 60 millions of victims"! In a few words, the outrageous mendacities of fascist Solzhenitsyn and MI5 agent Robert Conquest repeated by shameless EU deputies.

According to AFP, the above appeal to Bezos comes after American retail giant Walmart pledged in September to stop selling clothing with Soviet hammer and sickle symbols following similar complaints.

Amazon sells red T-shirts emblazoned with the yellow hammer and sickle symbol over the caption "CCCP", which means "USSR" in the Cyrillic alphabet similar to the merchandise that had been offered by Walmart.

The promotion of anticommunism by the European Union goes hand by hand with the rise of fascist and neo-nazi forces in Europe, as well as with the intensification of the anti-worker, anti-people policies within the EU. To those MEPs who undersigned the despicable appeal to Amazon, we have to say this: No matter how hard they will fight against communism, the achievements of the socialist period in the Soviet Union and eastern Europe will remain in the working people's hearts and minds.

The outdated, rotten system called "capitalism" is destined to disappear, alongside with its servants and "praetorians".