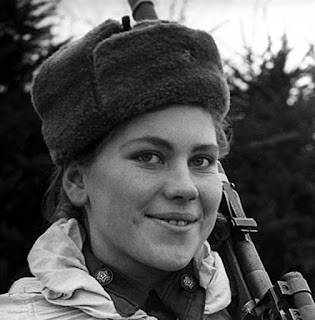 It was January 28, 1945 when the heroic senior sergeant of the Soviet Red Army, Roza Shanina, died after being seriously wounded in combat. She was 20 years old and already a legendary fighter of the Soviet Army against the Nazis.
Roza Georgiyevna Shanina was born in the village of Yedma, Arkhangelsk Oblast, Russia to logger Georgiy Mikhailovich Shanin and milkmaid Anna Alexeyevna Shanina. After completing elementary school in Yedma, she studied at a middle school at the nearby village of Bereznik.
In 1938, she walked 200 kilometers (120 miles) to the city of Arkhangelsk, Russia to continue her education. In the same year, she joined All-Union Leninist Young Communist League (Komsomol). In 1941, after the Soviet Union introduced tuition fees for college courses, she took on a job at a kindergarten in Arkhangelsk to help her own finances.
After the Nazi invasion of Soviet Union, she took on yet another role as a firefighter; she often spent many hours on the rooftops at and near the kindergarten of her employment to protect the children and the other employees.
In Dec 1941, her 19-year-old brother Mikhail Shanin was killed in combat at Leningrad, Russia. In 1942, after she completed her studies, she visited the local military commissariat for permission to serve. In Jun 1943, she was accepted in the Vsevobuch universal military training program. After some time, she was accepted into the sniper school; she excelled in this specialty and was offered a position as an instructor, but she turned it down, preferring to go to the front lines.
In Apr 1944, she was made the commander of the all-female 1st Sniper Platoon of the Soviet 184th Rifle Division, in the same month she would kill her first German soldier in Byelorussia and then was awarded the Order of Glory 3rd Class. In Jun 1944, all female snipers in her sector were ordered to be withdrawn, but she (along with many of the women in her platoon) disobeyed her orders and joined an infantry unit. She participated in the Vitebsk–Orsha Offensive in Byelorussia and then the Battle of Vilnius in Lithuania. In Sep, she was awarded the Order of Glory 2nd Class.
In Oct, she was honored by the Central Committee of Komsomol and received the Medal for Courage. In Dec 1944, she was wounded in the right shoulder by a Nazi German sniper.
In Jan 1945, she received official authorization for her to fight on the front lines. While fighting in East Prussia, her final confirmed kill count reached 59.
On 27 Jan 1945, she was seriously wounded in combat, and died on the following day. Her final rank was senior sergeant. She was initially buried on the shore of the Alle River (German: Alle, Russian: Lava), but her remains were later re-interred to Znamensk, Kaliningrad Oblast, Russia.