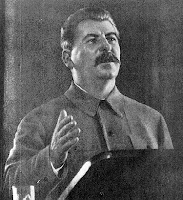 The October Revolution cannot be regarded merely as a revolution "within national bounds." It is, primarily, a revolution of an international, world order, for it signifies a radical turn in the world history of mankind, a turn from the old, capitalist world to the new, socialist world.

That also is the source of the profound sympathy which the oppressed classes in all countries entertain for the October Revolution, which they regard as a pledge of their own emancipation.

A number of fundamental issues could be noted on which the October Revolution influences the development of the revolutionary movement throughout the world.

1. The October Revolution is noteworthy primarily for having breached the front of world imperialism, for having overthrown the imperialist bourgeoisie in one of the biggest capitalist countries and put the socialist proletariat in power.
The class of wage-workers, the class of the persecuted, the class of the oppressed and exploited hasfor the first time in
the history of mankind risen to the position of the ruling class, setting a contagious example to the proletarians of all countries.

This means that the October Revolution has ushered in a new era, the era of proletarian revolutions in the countries of imperialism.

It wrested power from the bourgeoisie, deprived the bourgeoisie of political rights, destroyed the bourgeois state apparatus and transferred power to the Soviets, thus counter-posing the socialist rule of the Soviets, as proletarian democracy, to bourgeois parliamentarism, as capitalistdemocracy. Lafargue was right when he said, as far back as 1887, that on the morrow of the revolution "all former capitalists will be disfranchised."

The October Revolution thereby exposed the lie of the Social-Democrats that at the present time a peaceful transition to socialism is possible through bourgeois parliamentarism.

Menenius Agrippa, the famous Roman senator of ancient times, was not the only one to uphold the old "theory" that the exploited cannot do without the exploiters any more than the head and other parts of the body can do without the stomach. This "theory" is now the corner-stone of the political "philosophy" of Social-Democracy in general, and of the Social-Democratic policy of coalition with the imperialist bourgeoisie in particular. This "theory," which has acquired the character of a prejudice, is now one of the most serious obstacles in the path towards the revolutionization of the proletariat in the capitalist countries. One of the most important results of the October Revolution is that it dealt this false "theory" a mortal blow.

Is there any further need to prove that these and similar results of the October Revolution could not and cannot fail to exert an important influence on the revolutionary movement of the working class in the capitalist countries?

Such generally known facts as the progressive growth of communism in the capitalist countries, the growing sympathy of the proletarians of all countries for the working class of the U.S.S.R. and, finally, the many workers' delegations that come to the Land of Soviets, prove beyond doubt that the seeds sown by the October Revolution are already beginning to bear fruit.

Having overthrown the landlords and the capitalists, the October Revolution broke the chains of national and colonial oppression and freed from it, without exception, all the oppressed peoples of a vast state. The proletariat cannot emancipate itself unless it emancipates the oppressed peoples. It is a characteristic feature of the October Revolution that it accomplished these national-colonial revolutions in the U.S.S.R. not under the flag of national enmity and conflicts among nations, but under the flag of mutual confidence and fraternal rapprochement of the workers and peasants of the various peoples in the U.S.S.R., not in the name of nationalism, but in the name of internationalism. 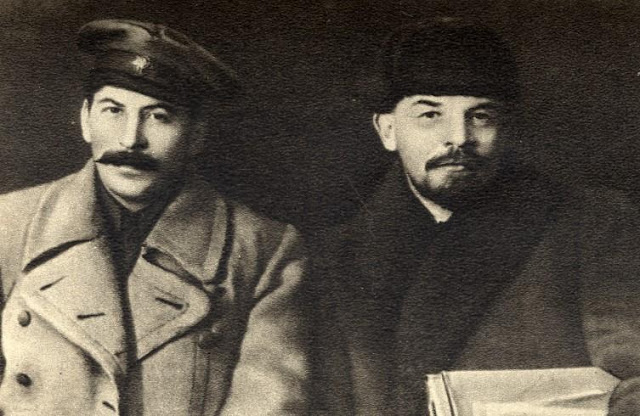 It is precisely because the national-colonial revolutions took place in our country under the leadership of the proletariat and under the banner of internationalism that pariah peoples, slave peoples, have for the first time in the history of mankind risen to the position of peoples that are really free and really equal, thereby setting a contagious example to the oppressed nations of the whole world.

This means that the October Revolution has ushered in new era, the era of colonial revolutions which are being carried out in the oppressed countries of the world in alliance with the proletariat and under the leadership of the proletariat.

It was formerly the "accepted" idea that the world has been divided from time immemorial into inferior and superior races, into blacks and whites, of whom the former are unfit for civilization and are doomed to be objects of exploitation, while the latter are the only bearers of civilization, whose mission it is to exploit the former.

That legend must now be regarded as shattered and discarded. One of the most important results of the October Revolution is that it dealt that legend a mortal blow, by demonstrating in practice that the liberated non-European peoples, drawn into the channel of Soviet development, are not one whit less capable of promoting a really progressive culture and a really progressive civilization than are the European peoples.

That legend must now be regarded as refuted. One of the most important results of the October Revolution is that it dealt that legend a mortal blow, by demonstrating in practice the possibility and expediency of the proletarian, internationatist method of liberating the oppressed peoples, as the only correct method; by demonstrating in practice the possibility and expediency of a fraternal union of the workers and peasants of the most diverse nations based on the principles of voluntariness and internationalism. The existence of the Union of Soviet Socialist Republics, which is the prototype of the future integration of the working people of all countries into a single world economic system, cannot but serve as direct proof of this.

It need hardly be said that these and similar results of the October Revolution could not and cannot fail to exert an important influence on the revolutionary movement in the colonial and dependent countries. Such facts as the growth of the revolutionary movement of the oppressed peoples in China, Indonesia, India, etc., and the growing sympathy of these peoples for the U.S.S.R., unquestionably bear this out.

The era of tranquil exploitation and oppression of the colonies and dependent countries has passed away.

3. Having sown the seeds of revolution both in the centres of imperialism and in its rear, having weakened the might of imperialism in the "metropolises" and having shaken its domination in the colonies, the October Revolution has thereby put in jeopardy the very existence of world capitalism as a whole.

While the spontaneous development of capitalism in the conditions of imperialism has passed -- owing to its unevenness, owing to the inevitability of conflicts and armed collisions, owing, finally, to the unprecedented imperialist slaughter -- into the process of the decay and the dying of capitalism, the October Revolution and the resultant dropping out of a vast country from the world system of capitalism could not but accelerate this process, undermining, bit by bit, the very foundations of world imperialism.

More than that. While shaking imperialism, the October Revolution has at the same time created -- in the shape of the first proletarian dictatorship -- a powerful and open base for the world revolutionary movement, a base such as the latter never possessed before and on which it now can rely for support. It has created a powerful and open centre of the world revolutionary movement, such as the latter never possessed before and around which it can now rally, organizing a united revolutionary front of the proletarians and of the oppressed peoples of all countries against imperialism. 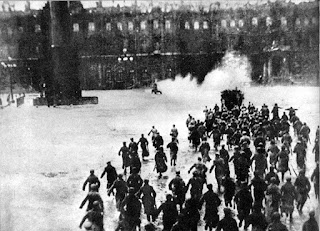 Capitalism may become partly stabilized, it may rationalize its production, turn over the administration of the country to fascism, temporarily hold down the working class; but it will never recover the "tranquillity," the "assurance," the "equilibrium" and the "stability" that it flaunted before; for the crisis of world capitalism has reached the stage of development when the flames of revolution must inevitably break out, now in the centres of imperialism, now in the periphery, reducing to naught the capitalist patch-work and daily bringing nearer the fall of capitalism. Exactly as in the well-known fable, "when it pulled its tail out of the mud, its beak got stuck; when it pulled its beak out, its tail got stuck."

This means, secondly, that the October Revolution has raised to such a height the strength and importance, the courage and the fighting preparedness of the oppressed classes of the whole world as to compel the ruling classes to reckon with them as a new, important factor. Now the labouring masses of the world can no longer be regarded as a "blind mob," groping in the dark and devoid of prospects; for the October Revolution has created a beacon which illumines their path and opens up prospects for them. Whereas formerly there was no world-wide open forum from which the aspirations and strivings of the oppressed classes could be expounded and formulated, now such a forum exists in the shape of the first proletarian dictatorship.

There is hardly room for doubt that the destruction of this forum would for a long time cast the gloom of unbridled, black reaction over the social and political life of the "advanced countries." It cannot be denied that the very existence of a "Bolshevik state" puts a curb upon the dark forces of reaction, thus helping the oppressed classes in their struggle for liberation. It is this that explains the savage hatred which the exploiters of all countries entertain for the Bolsheviks.

The era of the "stability" of capitalism has passed away, carrying away with it the legend of the indestructibility of the bourgeois order.

The era of the collapse of capitalism has begun.

Now it has had to dissociate itself from Marxism, and has actually done so; for under present conditions one cannot call oneself a Marxist unless one openly and devotedly supports the first proletarian dictatorship in the world, unless one wages a revolutionary struggle against one's own bourgeoisie, unless one creates the conditions for the victory of the dictatorship of the proletariat in one's own country.

A chasm has opened between Social-Democracy and Marxism. Henceforth, the only bearer and bulwark of Marxism is Leninism, communism. 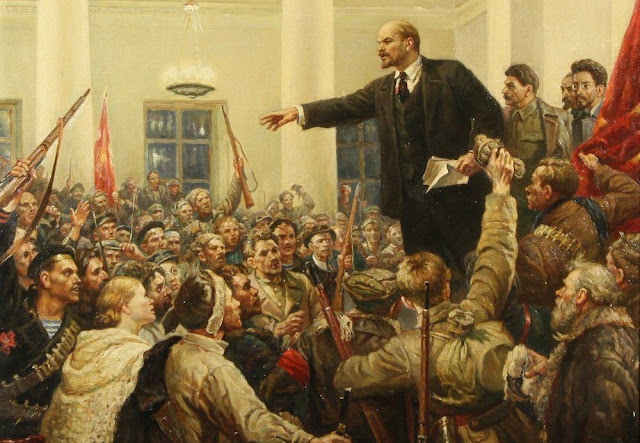 But matters did not end there. The October Revolution went further than drawing a demarcation line between Social Democracy and Marxism; it relegated Social-Democracy to the camp of the direct defenders of capitalism against the first proletarian dictatorship in the world. When Messieurs the Adlers and Bauers, the Welses and Levis, the Longuets and Blums abuse the "Soviet regime" and extol parliamentary "democracy," these gentlemen mean that they are fighting and will continue to fight for the restoration of the capitalist order in the U.S.S.R., for the preservation of capitalist slavery in the "civilized" states.

Present-day Social-Democratism is an ideological support of capitalism. Lenin was a thousand times right when he said that the present-day Social-Democratic politicians are "real agents of the bourgeoisie in the working-class movement, the labour lieutenants of the capitalist class," that in the "civil war between the proletariat and the bourgeoisie" they would inevitably take "the side of the 'Versaillese' against the 'Communards.'

The era of the domination of Leninism and of the Third International has begun.