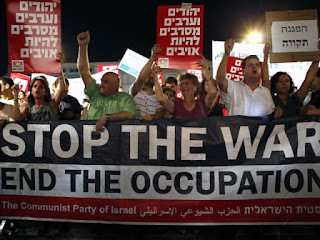 The Communist Party of Israel (CPI) and the Democratic Front for Peace and Equality (Hadash) have issued a statement in which they assure that the Arab-Bedouin village of Umm Al-Hiran in the Negev will not stand alone in its struggle to resist being uprooted by the far right Israeli government.
In their statement, the CPI and Hadash declare: “The aggressive violence of the Police on early Wednesday morning [January 18] attests to the criminal intent which resulted in the shooting death of Yacoub Mousa Abu al-Qee’an, a resident of Umm Al-Hiran, as well as injuries to tens of others, including Member of the Knesset Ayman Odeh who was scathed in the head by a ‘sponge bullet.’ The CPI and Hadash call upon their cadres to launch a series of militant actions to protest these criminal actions, while working in conjunction with all patriotic political and popular movements to broaden the struggle.”