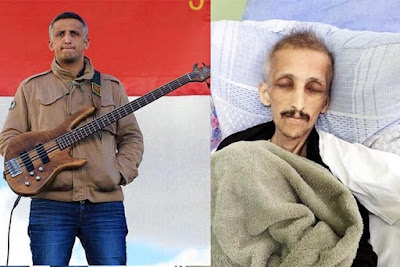 Turkish music band Grup Yorum have announced that their bass guitarist Ibrahim Gökcek has died at the hospital where he was treated.

After Grup Yorum applied to the Governor's Office of Istanbul to hold a concert, Ibrahim Gökcek had decided to end his death fast on the 323rd day and he was taken to a hospital in an ambulance on May 5.

Gökcek was 40 years old. His wife Sultan Gökcek, whom he married five years ago, is still arrested in Istanbul's Silivri Prison.

In the early morning of Wednesday 11 March, the house of death fasting Grup Yorum band members Ibrahim Gökçek and Helin Bölek in Istanbul, Turkey was raided by police forces. Gökçek, Bölek and three other people were violently detained.

Ibrahim and Helin, who have been on death fast for more than 260 days, were taken without their consent to Ümraniye Training and Research Hospital for enforced medical treatment.

According to the People’s Law Bureau any involuntary intervention on death fasters consists torture and could cause permanent damage on their bodies, including death.
Read more »