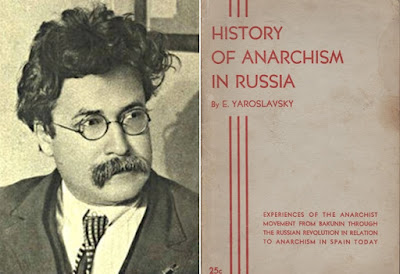 E.Yaroslavsky- History of Anarchism in Russia (Before the Bolshevik Party / Part I)

In the Union of Socialist Soviet Republics at the present time the anarchists no longer enjoy any influence over the masses. They are met with only as isolated individualists. The reason for this is the victory of socialism in the U.S.S.R. The old Russia, landlord and petty-bourgeoispeasant Russia, which fostered anarchism and gave birth to the founders of anarchism, those repentant aristocrats--Mikhail Bakunin, Peter Kropotkin and Leo Tolstoy--has passed away.
Read more »