In Italy we need the Communists! 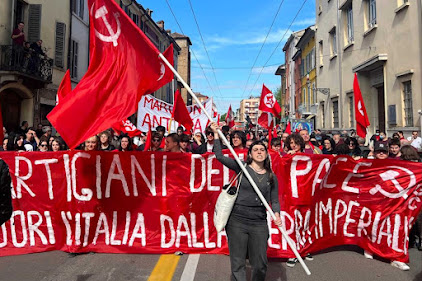 The following text is a very interesting statement issued by the Front of the Communist Youth of Italy (Fronte della Gioventù Comunista FGC) on the occasion of the results of the general elections. The original text in Italian can be found on the Facebook page of FGC.

"The real winner of the elections emerges from the Milan Stock Exchange which, yesterday, closed positively without being affected in the prospect of a right-wing government led by the “Brothers of Italy”. The big investors are calm because they know very well that the government that will emerge will be a friend of the bosses and a workers' enemy. In words it will be against Draghi, but of the same logic in essence.

The government that will be formed in the upcoming weeks will be in perfect continuity with the previous center-right, center-left and “tehnocratic” governments. It will manage the capitalist crisis which was aggravated by the pandemic and the outbreak of the imperialist conflict in Ukraine, guaranteeing the Euro-Atlantic loyalty and Italy's participation in NATO's plans. It will govern in the name of the interests of the big monopolies, loading the cost of the crisis – in terms of increasing the cost of living, repression, precariousness, decreasing actual wages and rights – on the shoulders of the working class and popular strata.

The victory of the nationalist and conservative right does not leave us indifferent. We aren't indifferent to the shift to the right of the entire Italian political exis, where the center-right becomes rights while maintaining the same electoral basin but seeing the internal balance of power changed, the social democrats becoming liberals and those who try to launch radical choices from the “left” doesn't go beyond timid social democracy.

But, we say it: From tomorrow, no one must try to say that the opposition passes through the center-left, the liberals and the Democratic Party (PD), that is through those forces that have already ruled on behalf of the bosses, paving the way for the victory of the right despite their fake anti-fascism during their electoral campaign, carrying out the worst anti-people reforms that not even the right had been able to do. The new government will be able to use the repressive tools put in place by the PD and the Five Star Movement against workers and students, and will strengthen them even further.

If the abstention grows, it is because the absence of a real alternative behind the alternation between the ruling parties is increasingly evident. An abstention which, especially the South, bourgeois analysis daringly try to attribute to bad weather or to issues that hide that true nature of the problem: years and years of anti-people politics and social butchery that have created intolerance and disillusionment about politics and their little histrionics. Not to mention the part of immigrant workers, about five million people, excluded from the voting.

We need a real opposition. Social, militant, class-based, which will highlight the exploited and the working people as protagonists. We would like to add: We need to respond with a political choice that will not leave our people at the mercy of the sharks. The misery of the results of those on the “left”, who re-proposed the usual electoral coalitions built at the last minute, speaks volume about the enormity of the problem.

We reserve for a more in-depth analysis of the electoral results in the upcoming days. However, there is one issue we want to reiterate. In Italy we need the Communists. Not as a kind of nostalgia, not of low-level opportunists, but of a Party of struggle and change, a Party of the working class and all working people.

We are doing our best but the facts dictate it: We can and must do more. Today, like yesterday, you will find us in our posts, for the overthrow of this rotten system."