Gorbachev exposed: "My ambition was to liquidate communism" 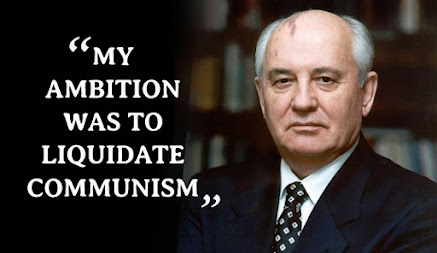 "My ambition was to liquidate communism, the dictatorship over all the people. Supporting me and urging me on in this mission was my wife, who was of this opinion long before I was. I knew that I could only do this if I was the leading functionary. In this my wife urged me to climb to the top post.
While I actually became acquainted with the West, my mind was made up forever. I decided that I must destroy the whole apparatus of the CPSU and the USSR. Also, I must do this in all of the other socialist countries. My ideal is the path of social democracy. Only this system shall benefit all the people. This quest I decided I must fulfil.
I found friends that had the same thoughts as I in Yakovlev and Shevernadze, they all deserve to be thanked for the break-up of the USSR and the defeat of Communism.

World without communism is going to be much better. After year 2000 the world will be much better, because it shall develop and prosper. But there are countries which shall try to struggle against this. China for one. I was in Peking during the time of the protests on Tienanmen Square, where I really thought that Communism in China is going to crash. I sternly demanded of the Chinese leadership that I want to speak to the protesters, but they did not allow me to do so. If Communism would fall in China, all the world would be better off, and on the road to peace.

I wanted to save the USSR, but only under social democracy rule. This I could not do. Yeltsin wanted power, he did not know anything about democracy or what I intended to do. We wanted the democratic USSR to have rights and freedom.

Then Yeltsin broke up the USSR and at that time I was not in the Kremlin, all the newspaper reporters asked me whether I shall cry? I did not cry, because I really managed to destroy Communism in the USSR, and also in all other European Socialist countries. I did not cry, because I knew that I fulfilled my main aim, that was the defeat of communism in Europe. But you must also know, that communism must be defeated in Asia also, to make the transition quicker to democracy and freedom in the whole world.

The liquidation of the USSR is not beneficial to the USA, since they have now no mighty democratic country (the former USSR) which I wanted to call the Union of Independent Sovereign Republics. I could not accomplish all of this. All the small countries now are thanking the USA for the help. I wanted the USA and the former USSR to be partners without the scourge of Communism, these could have been the ruling countries of the world. The road towards democracy will be a long one, but it is coming very quickly. The whole world must now defeat the last remnants of communism!".

The above abstract is from an interview of Mikhail Gorbachev Ankara, Turkey where he was a guest at a seminar at the American University. According to some sources it was published in the 'Dialog' newspaper in the Czech Republic, as well as in the Bulgarian gazette "Zarya" (No. 24, 1999). The abstract had been reproduced by "Rizospastis" Greek daily, the official newspaper of the Communist Party of Greece on October 8, 2000. The english version was published in "Northstar Compass" in February 2000.