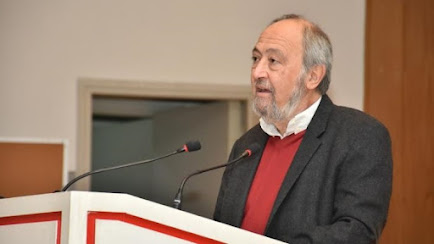 The imperialist war in Ukraine, following the unacceptable invasion of Russia, continues. The conflict between the USA, NATO, EU with capitalist Russia carries the risk of generalization and Greece is “up to the neck” on the side of Euro-Atlanticism. The government, with the support of SYRIZA and KINAL, has transformed the country into a military base. The US bases, for which all governments bear responsibility, are used. Greek military unites and armaments are sent to the “eastern front”.

This policy upgrades the role of the Greek capital (the shipowners will make a fortune from the transfer of the American LNG), but it turns against other peoples and transforms the country into a target of retaliation, thus involving the Greek people in great dangers.

In these conditions, the initiatives of the KKE and the struggle against the imperialist war and the country's involvement are of great importance. The struggle against any group of imperialists who rob the people is the “right side of history”. The shame of the bourgeois parties which applauded Zelensky and the fascists of Azov in the Parliament is not washed away, while the impact of the KKE's proud stance is big.

The pretexts used to justify the involvement in the war are leaky and the questions that arise are relentless: What does the deployment of Greek troops on the Ukrainian front, in the Persian Gulf or in Sahel have to do with the country's territorial integrity? The claim that by the side of the USA, NATO and EU the country can confront Turkish aggression has no grain of truth.

The facts are indisputable:

The people pay tens of billions for NATO equipment.

Turkey disputes sovereign rights, while overflights are on the rise.

A “bargain” has been set, with the intervention of the USA and the EU, over the joint exploitation of wealth-producing resources in the Aegean and Eastern Mediterranean.

NATO does not accept national borders and speaks about “NATO territory”, while it prioritizes the competition with Russia and China and will do everything to pull Turkey in the “western camp”, in order to strengthen the South-Eastern wing of the “alliance”.

Just the day before yesterday, the Minister of National Defense stated in the Parliament that “this isn't the best time to speak against Turkey in NATO”.

Cyprus, an EU member with British bases, has been suffering for 48 years from Turkish occupation and the island is divided. Those who were surprised by the absence of any reference to the Cyprus issue in Zelensky's speeches in Greece and Cyprus ignore the fact that the EU itself characterizes the Turkish invasion and occupation as an “unresolved conflict”.

The bourgeois governments and parties that talk about the geopolitical or energy upgrade of the country, advertise the relations with Israel, Egypt, United Arab Emirates, Saudi Arabia, all kinds of reactionary regimes, hiding the fact that the country;s participation in dangerous plans is rising. In addition, the Turkish leadership, which upgrades its presence in the region, intervenes and causes rifts in these alliances. The apologists of the Euro-Atlantic policy have been exposed.

The joint statement of the KKE and the TKP (Communist Party of Turkey) is in full accordance with the popular interests, pointing out among other things: "The Communist Parties of Greece and Turkey, under our common banner, proletarian internationalism, peace and solidarity between our peoples, call upon the working class and the other popular strata to strengthen their struggle against the imperialist war in Ukraine with the intervention of capitalist Russia, against NATO, and overall the plans of the bourgeois classes and imperialist unions that drag the peoples to the slaughterhouse of war with the involvement of our countries."

This is the necessary path for all the peoples."

The article was originally published in the Sunday edition of "To Vima" newspaper.