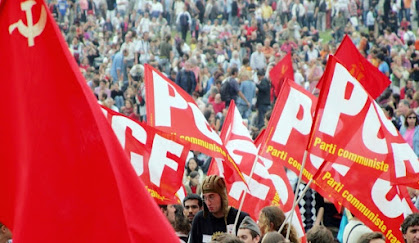 The bourgeois political system which systematically feeds and nurtures the far-right, using it as a “bogeyman” against the radicalization of the working class, is the same one which during the elections sets up “democratic fronts” and “fronts against populism”.

Unfortunately, the complete inability of the French communist movement to express and mobilize the working class and the popular strata towards a radical direction in clash with the bourgeois management and capital's interests, has contributed significantly to the entrapment of people in the politics of the capitalist establishment. The first round of the 2022 French elections showed that the communist movement of France remains submerged in political disgrace, being unable to influence the developments in favor of the working masses.

Obviously, when we speak about the communist movement we don't refer to the leftist Jean-Luc Mélenchon and his “La France Insoumise” party which was ranked third with a 21,95 per cent in the first round. Mélenchon has nothing to do with socialism-communism. By reading the political program and the positions of “La France Insoumise”, someone can clearly understand that Monsieur Mélenchon expresses a social democratic platform aimed to manage the capitalist system. The few radical slogans (e.g. Disengagement from NATO) are certainly not enough to hide the nature of “La France Insoumise” as a party of the bourgeois establishment which aims to entrap popular masses in reformist perceptions.

After all, being a member of the “European United Left” (GUE/NGL) in the EU Parliament, alongside other social democratic parties like SYRIZA, Die Linke and Podemos, the party of Mélenchon acts as a “bulwark” against the radicalization of popular indignation, spreading illusions about a so-called “pro-people” management of capitalism, the “reformation” of the EU and EU treaties, the promotion of “Green New Deal” as an antidote to the capitalist crisis.

The ideological generation and discredit of the French Communist Party

In the first round of the French election, the candidate of the French Communist Party (PCF) Fabien Roussel received just 2.28% of the vote. It is the first time since 2007 that the PCF participates in the presidential election with its own candidate; in 2012 and 2017 the party had endorsed the candidacy of Melenchon. However, the apparent discredit of the PCF by the voters is not a new thing. In the 2007 elections, the then party candidate Marie-Georges Buffet had received 1.93% while in 2002 Robert Hue had achieved 3.37%.

The electoral collapse of the French Communist Party- the once powerful party of Maurice Thorez and Jacques Duclos- reflects its ideological and political mutation and degeneration, a process that began several decades ago when the PCF adopted the opportunist current of Eurocommunism and distanced itself from the ideological foundations of Marxism-Leninism. In the years following the counterrevolution overthrows in the Soviet Union and Eastern Europe, the reformist mutation of the French Communist Party accelerated irreversibly, despite the honest efforts by individual party members to resist the ideological degeneration.

We shall not forget that the PCF participated in social democratic governments, such as the ones of Mitterrand and Jospin, thus contributing to the anti-popular policies that led to the rapid deterioration of the workers and popular strata's living standards. At the same time, the Communist Party supported the process of European integration, especially the 1992 Maastricht Treaty which became the “springboard” for the further strengthening of austerity and anti-worker policies.

The election of Robert Hue as the party's leader in 1994 and the subsequent 29th PCF Congress in 1996 ratified the completion of the Party's ideological mutation: Democratic centralism was abolished, the Soviet Union was characterized a “dictatorship upon the proletariat”, the references to the October Revolution were eliminated, the class-based analysis in the Party's documents was replaced by generalizations about “globalization” and “neoliberalism”, while even the symbolic invocations to communism, revolutionary violence and the dictatorship of the proletariat, etc, ceased to exist.

In 1997, once again, the French Communist Party supported the social democratic coalition government under Lionel Jospin, while in 1999 the Party's stance towards the NATO imperialist intervention in Yugoslavia was utterly disappointing: While it verbally condemned the military violence, in practice it remained in the coalition government of France thus providing a cover for the imperialist war.

It's been years since the PCF presented “its credentials” to the French bourgeois class, by transforming into a pillar of social democracy. Today, any reference to France's Communist Party can only be perceived as an unpleasant joke, given the complete discredit of the country's communist movement. This discredit goes hand by hand with the broader retreat of the organized class labor movement in France, the dominance of pro-employers' trade unionism and the emergence of vague, classless movements such as the “Yellow Vests” that aim to defuse and manipulate popular indignation in a harmless way for the establishment.

At a time when the working class and the people are trapped between Macron and Le Pen, with Mélenchon playing the role of a left-wing column of bourgeois politics, only the rise of the class struggle in conflict with capital and its power can bring positive developments for the working people of France. That is why the existence of a Communist Party, with an actual revolutionary strategy based on Marxist-Leninist principles, is an absolute necessity.

In this context the existence of two Communist Parties, which participate in the International Meeting of Communist and Workers' Parties (IMCWP), provides hope that the communist movement in France can be raised from the ruins. The “Pole of Communist Revival in France” (PRCF) and the “Communist Revolutionary Party of France” (PCFR), despite their currently limited organizational capabilities, have the potential to express the interests of wide working class strata, to attract progressive people and parts of the country's youth, in order to begin the necessary counterattack against the power of capital and imperialist unions. For a France free of exploitation, for socialism-communism.