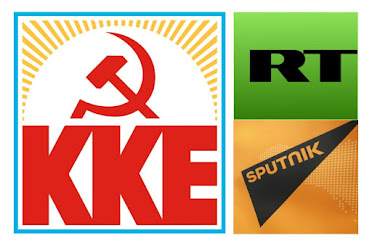 More analytically the KKE statement (here in Greek) reads:
“The interruption of the transmission of “Russia Today” and “Sputnik” news networks in Greece, also through the blocking of the respective websites, is an unacceptable and dangerous action, while it feeds threats against journalists and employees in these media. This action is not really directed against the unacceptable Russian invasion, but is part of the effort to enforce the propaganda and fake news that are unilaterally launched by the “Euro-Atlantic” side and are utilized by the government to justify Greece's involvement in the imperialist war.

It is one thing the criticism of the news or information transmitted by all the media (including the above) and another the unacceptable ban of media and journalists, depending on whether or not their content is preferable.

The government bears huge responsibility for the practice which paves dangerous paths and that is why it must stop here and now”.