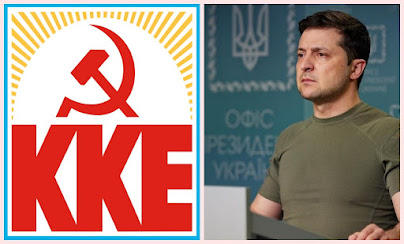 The Communist Party of Greece (KKE) will not participate in the Parliament's special session on April 7th, in which Ukrainian President Volodymir Zelensky will address the body, 902 portal has reported.

The KKE points out that “Zelensky represents a reactionary government backed by the US-NATO-EU camp and, like Russia, is responsible for the drama of the Ukrainian people”.
The Communist Party adds that for years the Ukrainian government has supported and integrated Nazi groups, persecuted and imprisoned communist and has outlawed the Communist Party of Ukraine.
It is characteristic that the Ukrainian government has blacklisted cadres of the KKE, including current Vice President of the Greek Parliament and MP Giorgos Lambroulis and the former KKE MEP Sotiris Zarianopoulos due to their support towards the persecuted Ukrainian communists.

The invitation of the Greek government to Zelensky has nothing to do with the solidarity to the people of Ukraine, the KKE adds. Based on the above, the stance of the KKE is obvious and would be the same if the guest was Biden or Putin.

President Zelensky is to address the Greek parliament via video link on Thursday, April 7th following an invitation by Greek Prime Minister Mitsotakis. Both the social democratic opposition parties of SYRIZA and KINAL hailed the initiative as a “positive move of solidarity”.