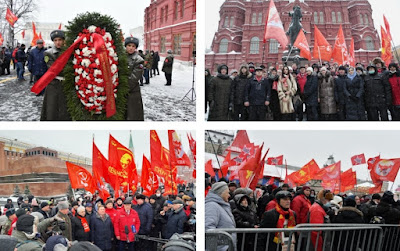 On the 98th anniversary of the death of Vladimir Ilyich Lenin, hundreds of communists, workers, young men and women gathered today in Moscow's Red Square in order to pay tribute to the leader of the Great October Socialist Revolution.

The action was attended by representatives of the Communist Party of the Russian Federation, the Lenin Komsomol, the Movement in Support of the Army, "Children of War", the "Russian Lad" movement, the Union of Soviet Officers, the All-Russian Women's Union "Hope of Russia", the "Left Front", the movement "For New Socialism" and others.
Wreaths and flowers were laid at Lenin's Mausoleum as well as in the graves of prominent Bolshevik leaders at the Kremlin Necropolis.

Similar events were organized by communists in other Russian regions and cities.