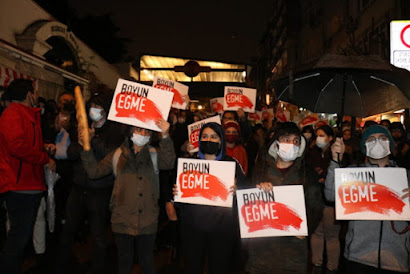 “Our labor is exploited, our country is plundered. Our lives are being stolen with prices that change every day, with increasing bills. We have to resist for our life, for our future. Now is the time to stand up!”, reads a statement by the TKP which calls the working people to mobilize against the governmental policies.
Under the slogans "stand up against expensiveness" and "Government resign!" hundreds of people participated in rallies organized by the Communist Party in districts of Istanbul and Ankara on Tuesday and Thursday.

Following orders of the government, Turkish police escalates repression against political rallies. Yesterday, riot police forces fired tear gas to break up a protest by women in Istanbul who were marching against gender violence.

While the communists are in the streets, the bourgeois opposition parties have called the people to wait until the 2023 elections!

Commenting on the situation, the General Secretary of the TKP Kemal Okuyan points out in an article published in "soL" newspaper:

“Going out is "bread and butter" for the government…” “The AKP also wants people to take to the streets…” “Stay away from the demonstrations, wait for the elections…”, Or in summary, "do not provoke"!

[...] Saying this, the system's opposition claims that it will save the country. [...] This is an opposition that regards the people's gatherings and rallies as "dangerous", except from election rallies. Thus, what they understand by freedom, justice and democracy is revealed once again.

[...] The government is trying to criminalize these protests, and the opposition is after it, with the same mindset.

In short, it is our opposition that is "bread and butter" for the AKP!"

[...] That's why they are saying nothing else today, but asking for an "early election" and trying to prevent others from making noise".