"Autumn 2021 was marked by a series of particularly impudent provocations of Ukrainian punitive troops in Donbass. They are shelling cities, kidnapping people, using Turkish drones, seizing settlements on neutral territory, neglecting the Minsk agreements. People are dying, incl. children. The statesmen and oligarchs standing behind the punishers once again use their simple and sneaky trick: they solve their selfish problems, killing dozens of people and destroying the living environments of thousands. They use worsening of the situation at the border and the “threat” from Russia, and beg for funding from the US and the EU, which support the nationalists.

Over the past seven years, Ukraine has turned into a real fascist state. It began with destruction of monuments to Lenin and other revolutionary and Soviet leaders, with burning alive the participants of peaceful protests against unconstitutional actions (House of Trade Unions in Odessa on May 2, 2014)It continued with rampant nationalism; with attacking and killings journalists and leftist activists; with brazen violence against migrants and representatives of national minorities; and at the governmental level it continued with the glorification of Bandera’s men - Hitler's helpers and traitors of Ukrainian people. They use Nazi symbols of 1941-1945, even salute them in the army; they hold torchlight processions of the Nazis;they prohibit by law any activities of the Communist Party (and get approval of Nazi thugs)

Many of communist and socialist activists, being listed at the infamous site “Mirotvoretz” (Peacemaker),that exists under the control ofUkrainian Security Service, were forced to leave the country.

Under pressure from transnational corporations from various imperialist countries, the Soviet industrial legacy was destroyed and sold off by bourgeois governments and oligarchs, who decided that a “utilization” strategy is more profitable for them than keeping factories and, therefore, hundreds of thousands of jobs. The trade unions and labor movement are not completely suppressed, but they are broken and disorganized. Deteriorating living conditions of the working people obviously make struggle necessary.

The signs of political struggle could still be observed in Ukraine before the "Maidan" of 2014, but today the workers’protestsare mainly directed against the rise in prices and tariffs for housing and energy, against the depreciation of retiree benefits and payments. At the same time, there is now much less opportunity to coordinate the actions of the working people and to transfer the experience of the proletarian political struggle. The working people are demoralized, they have been deceived many times. Millions of people have lost their normal jobs, and at the same time have lost any ability for class self-organization. The working people simply survive, many are forced to work hard as serfs both at home and even more oftenerabroad.

Even bourgeois democracy has been constantly trampled upon and shrinked. Any independent media are prohibited. Resistance attempts are completely suppressed almost instantly. Bullying for political, linguistic, religious reasons has become commonplace in modern Ukraine. The people of Donbass, who did not want to submit to fascist influence, found themselves trapped in the contradictions between the imperialists of the West (supporting the Ukrainian oligarchy and inciting the nationalist authorities of Ukraine to unleash war), and the protectionist government of imperialist Russia, that has been trying to protect the interests of Russian oligarchs. There is now neither peace nor declared war in the Donetsk and Lugansk regions. But what is happening is more like a war. Shelling by Ukrainian punitive forces has become a daily practice for 7 years. Not only the military are dying, but also the workers who stood up to defend their home. Old people, children and women die under the fire. On the way to school, on the way home, on the way to the store or to work - to a facility that has not yet been completely ruined by capitalism and the war. The troops of the Donetsk Peoples Republic and Lugansk Peoples Republic can neither attack (the Minsk agreements do not allow this, and the republics don’t have enough resources for that), nor can they retreat (this will lead to the slaughter of the civilians by Nazi punishers, which they openly declare). The soldiers of the self-proclaimed republics can only occasionally fire back at the rampaging enemy. 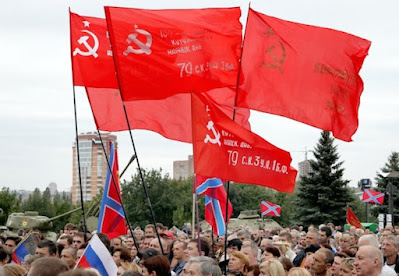 Capitalist Russia does not help to resolve the situation. According to the decision of Moscow politicians, the unrecognized republics of Donbass receive some help from Russia, but only as much as to maintain the status quo, and not to antagonize the "Western partners". So the armed forces of the republics can’t retreat, and can’t advance. Business and local politics are much more important than the workers of the neighboring people's republics, incl. citizens of Russia.

No external force is either capable or willing to punish the Ukrainian war criminals and lead the peoples to peace. Only working people themselves: Ukrainian, Russian and all others, can do it, can struggle for peace, socialism and happiness, against imperialism.

Fascism cannot be healed with words. This abscess is to be removed. It is possible to finally eliminate the symptoms only by putting an end to its cause –to capitalism. It is necessary to explain it to the workers in Ukraine, Russia, the Donbass region and around the world: only a class union of workers can resolve this malignant situation and remove any similar relapses of fascism in other countries.

Long live the international friendship of the working people!Long live the new international socialist revolution!Let's rebuff the US and EU imperialists encouraging the fascists.Nazi Bandera executioners must be brought to justice!"
SolidNet Parties

(the list is open for other parties to join)