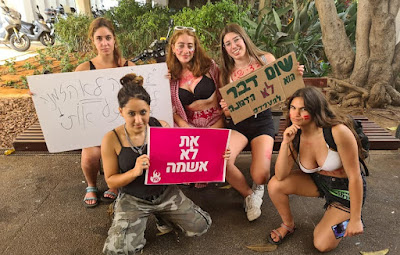 About 2,000 participants marched in a SlutWalk in Tel Aviv on Friday, October 15, protesting sexual violence, discrimination and victim-blaming.
Participants, among them members of the Young Communist League of Israel, shouted slogans such as: “I believe you,” while carrying signs with pictures of sex offenders and major streets across the city were blocked as demonstrators made their way to the main rally at Habima Square.
The march started at Atarim Square, the former home of the infamous Pussycat strip club under the title “SlutWalk Tel Aviv: Nothing is an invitation to rape,” holding signs that read “it is not your fault” and “end femicide,” and chanting “no means no.”

“An environment that allows for the treatment of women as objects; Silencing and blaming of victims; and a helpless legal system,” said the Kulan organizers of what enables sexual violence to run rampant in Israel. “In order for a victim of sexual violence to have the power to reveal themself and complain, the public must stop looking at what she was wearing and how many men she has been with and start looking at the offender.” “We will not continue to allow violence because no one is at fault for being hurt and every woman can live the way she chooses, wearing any clothing that she wants without fear of being raped or of her clothes being called an invitation for rape.”

This year the march’s end point was a feminist fair at Habima Square in which many feminist organizations took part including The Women’s Lobby, Women Lawyers for Social Justice, El HaLev, the Tel Aviv Sexual Assault Crisis Center and many more.

The SlutWalk is a transnational movement that was founded in 2011 when a Canadian police officer said that women “should avoid dressing like sluts” if they did not want to be victims of sexual violence. Women gather for SlutWalks around the world to protest this perception that a woman’s actions are the cause of violence against her.