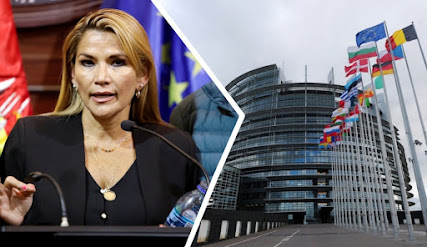 The story behind the European Parliament's so-called “Sakharov Prize for Freedom of Thought” is known. Each year, the EU Parliament awards the Sakharov Prize to “honour” “exceptional individuals and organisations” who supposedly defend “human rights” and “fundamental freedoms”.
Nonetheless, the actual aim behind this “award” is the attempt of the European Union to present herself as a “defender of human rights”, to reward the stooges of imperialism and to promote anti-communism.
After all, the prize bears the name of Andrei Sakharov, the known Soviet scientist who became a “dissident”. Numerous prominent anti-communists whose activity is related to imperialist centers have been awarded by the EU Parliament with the Sakharov prize: In 2002 and 2010 the prize was given to US-backed Cuban counterrevolutionaries, Oswaldo Payá Sardiñas and Guillermo Fariñas, while in 2017 the recipient of the “Sakharov Prize” was the... Democratic opposition of Venezuela!!

This year, the European Conservatives and Reformists (ECR) group of the EU Parliament decided to nominate a far-right putschist: The US-backed Bolivian coup leader Jeanine Áñez who is currently imprisoned on charges of terrorism, conspiracy and sedition. According to a Bolivian Parliament report, Áñez must be charged for genocide, being responsible for the massacres in Senkata and Sacaba.

Without doubt, the nomination of Áñez is a direct insult to the democratic feelings of the people of Bolivia and all Latin America, as well as a shameful approval of imperialist-backed coup attempts.