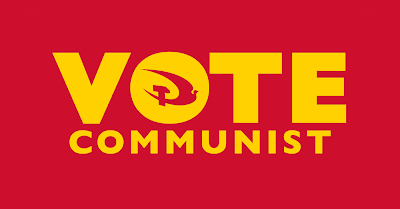 Local elections in Britain are due to be held on 6 May 2021 for 145 English local councils, thirteen directly elected mayors in England and 39 police and crime commissioners in England and Wales.
There are also elections to the Scottish Parliament, Senedd (Welsh Parliament) and London Assembly, the last in conjunction with the London mayoral election.
During the last months, under the slogan #VoteCommunist, the Communist Party of Britain (CPB) has been engaged in one of the party's biggest electoral campaigns in decades. The party is actively campaigning in over 40 seats for the Scottish Parliament, Welsh Senedd, London Assembly and various English county and district elections.
The CPB is campaigning under the slogan “Capitalism is the problem — Socialism is the solution,” with a policy platform drawing out the stark choices between the realities of capitalism and the socialist alternatives.
A message posted at the party's website reads:

"The 2021 #VoteCommunist election campaign will oppose austerity, mobilise workers against precarious work and unemployment and fight for public ownership of local transport services and utilities. We campaign for full-funding of public services and a pay rise for working people, including a rise in the minimum wage and pensions.

Our candidates will make the case for powers to be returned to nation and local government across Scotland, Wales and England where it can be made more accountable. We campaign for funding to support local economies and build council housing. We want working people to be the decision-makers, not the billionaire one per cent of the population who dominate our lives.

You won’t read about our candidates in newspapers or on TV channels as the billionaire media owners don’t like political parties that refuse to be bought out!

Many of you will not have had an opportunity to #VoteCommunist before. We ask you to take a short while to find out What we stand for.

The communists have long campaigned for voting rights to be extended to all 16 year olds for all elections. We ask new and first time voters to find out what Communists advocate and how they intend to achieve their aims. Read the Youth Charter.

In the last 18 months the Communist Party has grown significantly and is opening new branches across Britain. There will be a local branch near you. Last year we celebrated our centenary, fully a 100 years given to a struggle to improve the lives of working people. If you want to find out more about our campaigns, policies and membership go to Get Involved."
IN DEFENSE OF COMMUNISM ©