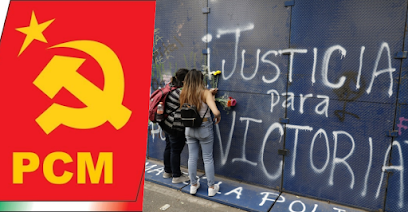 The death of 36 year-old Victoria Esperanza Salazar – a Salvadoran migrant who died in Tulum, Mexico, after a policewoman put her knee on her back for several minutes – continues to evoke outrage on after additional details of her life and how she died surfaced.

In a statement, the party organization of the Communist Party of Mexico (PCM) in Yucatán peninsula points out:
"On the afternoon of last Sunday, March 27th, in the streets of Tumben Kah neighborhood of the Tulum municipality, Quintana Roo, members of the municipal police subdued a women, recognized as Victoria Esperanza Salazar Arrianza from city of Sonsonate, El Salvador, in an obvious abuse of authority that caused her suffocation and consequently death.

Once again, it becomes more than clear the repressive and class role of the state forces which do not fulfill the role of protecting the working class and the popular strata, but rather ensure the interests of the bourgeoisie.

While thousands of voices demand an end to femicides and the systemic violence against working women, the police, the repressive arm of the state, assassinate them with impunity in broad daylight.

Additional to this problem is the fact that the government of the Fourt Transformation (4T) intends to create military protocols in the municipal, state and federal police, as well as in the National Guard, the Navy and the Army. Will the working class be safe with the armed forces in the street, or will they only be there to repress anyone who represents a nuisance for the capitalists' interests?

In capitalism, the forces of the state serve the oppression of one class over another. You will never see a policeman, or military officer, repressing the big businessmen or their children, however, the frequent repression against the working class and the popular strata does not stop, as it has been demonstrated on more than one occasion in the state of Quintana Roo.

We join the voices of outrage for that fact and demand that those who are involved will pay for their actions. We demand the resignation of Tulum's municipal president Victor Mas Tah, as well as of the general director of public security and municipal traffic of Tulum, Nesguer Ignacio Vicencio Mendez.

We demand an end to the violence and repression exercised by the entire Quintana Roo police forces, as it is not the first time that a police officer commits police brutality against a citizen.

We know that these events will not cease if the capitalism system, which causes them, is not destroyed and that is why the Communist Party of Mexico in the Yucatan Peninsula emphasizes that the fight must be directed in the root of the problem, against the capitalist system, for socialism-communism.

Proletarians of all countries, unite!"