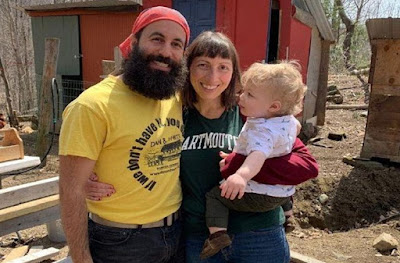 Helali’s family from his mother’s side holds an important legacy of heroic struggles for people’s freedom. Christopher’s grandfather and great-uncles were members of communist-led Greek resistance organizations (EAM-ELAS, EPON) during the Axis Occupation of Greece. His grandfather’s brother, Yiorgos, was executed by fascists for being a communist, during the 1946-1949 Greek Civil War.

The militant legacy of his Greek family had a profound impact in the formation of Christopher’s political views. These views are clearly illustrated in the priorities he sets as a candidate for U.S. Congress.

"We are at a very important moment in not only the history of the United States but the history of humanity. We face multiple existential crises including nuclear weapons and the climate emergency. Therefore, our campaign was born from the need to move beyond the failures of capitalism, to build socialism, and to usher in a new era of peace for the nations of the world”, Helali points out in a recent news release.

A staunch anti-imperialist, Christopher Helali calls for the abolition of NATO and the termination of the U.S. warmongering hostility towards Russia and China, stressing out that “the time has come to end war and usher in an age of peace, self-determination, and mutual cooperation among all nations”.

While bourgeois candidates, Democrats and Republicans, are competing with each other on who is the most effective political representative of large business groups, Helali believes that “now is the time to rise up against the rich, ruling elite”.

“The ruling class lives off of the work and sweat of farmers and workers across the world. We say no more. The time has come for the working class to seize power and to liberate itself from its bondage to these elites. We want to build a society where every single person can have access to free and high-quality health care. Vaccine technology must be public and open access. We want education to be free and high quality where everyone’s academic aspirations are supported all through their studies”.

The PCUSA candidate from Vermont has strong views against racial violence and discrimination, advocating equality among all people regardless of their race, skin color, ethnicity and religion.

“Ending racism will require the abolition of the capitalist system and the construction of a socialist state. To address the historic wrongs against Amerindians, African-Americans, and Latin peoples, there will need to be a system of reparations. The prison-industrial complex will need to be abolished”, Christopher stresses out.

Targeted by the U.S. governmental agencies

Recently, a leaked document from the U.S. Department of Homeland Security listed Christopher Helali as an activist targeted for his ANTIFA links and his time fighting ISIS in Syria by the side of the Kurdish forces (YPG). On the issue, the Party of Communists, USA (PCUSA) issued the following statement:

On August 3rd, 2020, The Nation reported a leaked intelligence report from the Department of Homeland Security (DHS) that features the name and personal information of our party member and comrade Christopher Joseph Helali. The timing is interesting given that Christopher just announced a run for congress in Vermont as a Communist, representing our party and challenging U.S. Representative Peter Welch (D).

This is nothing new for us Communists. The past century has taught us that the U.S. government will use whatever tools, repressive apparatuses, and tactics at its disposal to crush the Communist movement. The U.S. has a long history of this from the Palmer Raids in the 20s, the McCarthy Era in the 50s, COINTELPRO in the 60s and 70s up to today. The intimidation, harassment, stalking, slander, defamation, detentions, searches, seizures, and imprisonment will not deter us Communists. The red banner will always fly high above the defeated headquarters of the enemy.

As a party, we stand fully behind our comrade Christopher and we will defend all our comrades from the state and its lackeys, both on the right and on the “left.” We stand in a long tradition of dedicated Marxist-Leninists who will give everything we have for the working class.

STOP TARGETING COMMUNISTS!
HANDS OFF THE PARTY OF COMMUNISTS USA!
¡VENCEREMOS! WE WILL WIN!

Central Committee of the Politburo
Party of Communists USA.

Helali in his own words

We asked Christopher Helali to tell us what motivated him to run for U.S. Congress. He said:

“I decided to run for U.S. Congress after many years of contemplating the failures of the Communist Party USA. I was tangentially involved with the CPUSA through their communist youth wing while in high school. It wasn’t until 2012 when I formally joined the CPUSA. The reformist and liquidationist party program under the leadership of Sam Webb was infuriating. Reading the KKE’s response to this in their ruthless criticism of the CPUSA was the final nail in the coffin. The CPUSA is no longer capable of leading the U.S. working class to socialism. While I attended the CPUSA convention in 2019 in Chicago, the 100 year anniversary of the party, as a party member representing Vermont, I could see that there would be no changes to the Webb plans. Much to my surprise, even Trotsky’s image was featured in the slideshow during the convention. I finally decided to join the PCUSA, the Marxist-Leninist continuation of the CPUSA.

My main priority if elected will be to struggle against U.S.-NATO imperialism. This means ending all the wars, withdrawing U.S. troops from all foreign military bases, abolishing NATO, and cutting the military budget to the bare minimum. The United States should work towards nuclear disarmament and towards peace with Russia, China, the DPRK, and Iran. This will allow us to transform the economy from a war economy to a peace economy in line with socialist principles and development. While one representative cannot do much, I believe the election of a communist to congress will help shatter the reformist and defeatist illusions dictated to the working class by the ruling class and bourgeois mass media”.

Christopher emphasizes that the existence of a strong Communist Party, with marxist-leninist characteristics, is a necessity for the U.S. working class and slams the role of social democrats and reformists: 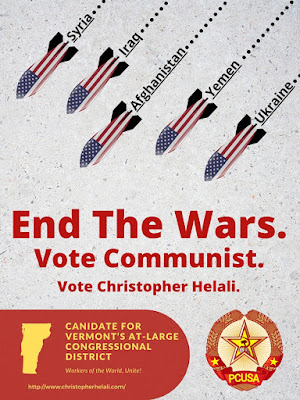 “Yes, I am a member of the Party of Communists USA (PCUSA) and supported by our party for my campaign. So far, our reception has ranged from people ignoring us to tremendous support from rural workers and farmers who see a future that moves beyond the wars for empire and the barbarism of capitalism. The hysteria over communism in the U.S. is a pillar of our politics and is nothing new for us communists. Even the name communist has been so misused, sections of the population believe former President Barack Obama was a communist even though he was a capitalist. We have weathered all the anti-communist crusades.

Yet, today there is a renewed interest among the youth and sectors of the working class in socialism. Sadly, history has taught us that the social democrats and reformist socialists pave the way to fascism. The revolution that is necessary fails due to their inability to wield political power, their class collaborationist tactics, and unwillingness to seize the means of production. This is clearly illustrated by Senator Bernie Sanders from my state of Vermont and his inability to use his large, dynamic, and energetic political movement to seize power. Instead, he acquiesced to the corporate Democrats led by Joe Biden. Thus, the ruling class safeguards their interests. It is our hope that the youth and working class can see that it is only the communists that fight for them and will lead them to socialism.”

The candidate of the PCUSA from Vermont expresses the belief that a free, universal, high quality health system is “a human right and a necessity for all the people”. He calls Trump government’s response to the COVID-19 pandemic as “criminal”, praising the role of Cuba as a champion of internationalist solidarity:

“The U.S. government’s response to the COVID-19 pandemic has been abysmal and criminal. While workers and farmers suffer, the U.S. government bails out major corporations and continues its warmongering against China, Russia, Iran, and Venezuela. The fact that in the wealthiest country in human history people are going hungry, getting evicted, sleeping on the street, and unable to get free healthcare is criminal. While the U.S. vilifies Cuba, it is Cuba that is sending its doctors all over the world to help nations deal with the pandemic while the U.S. exports weapons to continue its imperial hegemony. The United States is a failed state. It is a rogue state. The U.S. government is anti-worker, both Republicans and Democrats are beholden to the capitalists and could care less about the plight of the working class. That is why workers and farmers are slowly realizing the absolute necessity of a free, universal, high quality health system. It is a human right and a necessity for all people.”

Every worker and farmer in Vermont, every man and woman of progressive ideas who understands that capitalist barbarity must end, has the moral duty to support Christopher Helali in the November 3rd elections. Check out Christopher campaign’s website: christopherhelali.com.