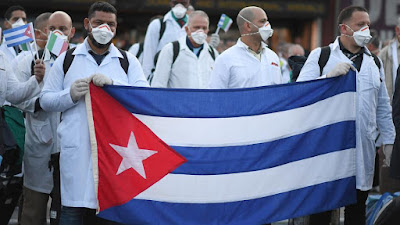 In a joint statement, on the occasion of Fidel Castro's 94th birth anniversary on August 13th, the Greek Team for the Nobel Peace Prize to Cuban Doctors and the Jose Marti Cuba-Turkey Friendship Association point out that the 2021 Nobel Peace Prize must be awarded to the "Henry Reeve" Medical Brigade for its long-time internationalist activity as well as during its significant contribution to the fight against the ongoing Covid-19 pandemic.


The full statement is as follows:

"Today we celebrate the 94th birth anniversary of Fidel Castro Ruz, the great leader of the Cuban Revolution.

The Cuban Revolution, which has been instrumental in one of the most important social transformations in modern history, continues to shed light on the peoples of the world.

The socialist island is exemplified in many topics such as education, health, social security, women's and children's rights, disaster management, environment, human rights, and the right to housing among others.

Cuba extends a helping hand to the peoples wherever they are in major disasters such as earthquakes, hurricanes, epidemics, and floods.

With its solidarity, fraternity, internationalism, and anti-imperialist attitude, Cuba shows that another world is possible.

In addition to 28,000 Cuban healthcare workers who support local and national efforts in 58 countries, 3772 healthcare professionals from 45 Henry Reeve Medical Brigades in 38 different countries have so far been involved in the fight against the COVID-19 pandemic. Thousands of lives have been saved.

Cuban doctors continue to heal the wounds of the peoples.

The 2021 Nobel Peace Prize should be awarded to the Henry Reeve Cuban Medical Brigade, which is fighting the COVID-19 pandemic in many parts of the world.

On the birth anniversary of the great leader Fidel Castro Ruz, we express the feelings of fraternity and solidarity of the Greek and Turkish peoples from both sides of the Aegean Sea.

Long live the Fraternity of Peoples!

GREEK TEAM FOR THE NOBEL PEACE PRIZE TO CUBAN DOCTORS 2021 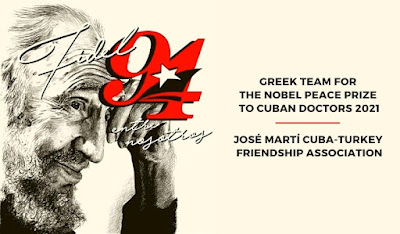 The Henry Reeve Medical Brigade, created in 2005 by Cuban President Fidel Castro, has been on the front lines providing disaster relief around the world.
During the COVID-19 pandemic, it has sent over 1,450 Cuban medical personnel to fight COVID-19 in 22 countries, including italy, Mexico, Barbados, Jamaica, Nicaragua.
In Greece more than 27,000 people have requested that the Nobel Peace Prize be awarded to the Cuban Henry Reeve Medical Brigade in an initiative that kicked off on 28 March.