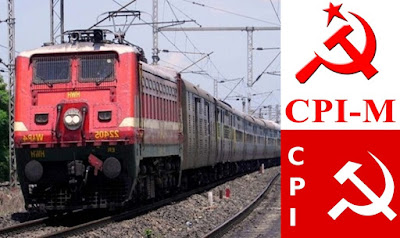 The private sector utilising the network established over centuries with all the required infrastructure will run passenger trains making super profits.

The Indian Railways remains as the most important network uniting our country and providing public transportation for crores of our people. The livelihood of crores of our people are dependent on the railways.  Such privatisation undermines the basis of India’s self-reliant economy.

Contrary to the claim that this will boost job generation, past experience has shown that such privatisation results in a huge job loss creating insecurity for lakhs of employees of the Indian Railways.

The Central Government and Prime Minister Modi refuse to learn from international experience of how such privatisation of public transport has imposed unprecedented difficulties and burdens on the people. The Indian Railways is a public service. It is not a profit generating enterprise. This character cannot be undermined.

This decision has come at a time when the country and the people are in the midst of a serious effort to combat the surging Covid pandemic. Globally, as well as in our country, we have seen how reckless privatisation of health facilities have hampered and adversely affected the combat against the virus. Health, education, public transport are public services that need to be strengthened and not weakened through privatisation.

The Polit Bureau of the CPI(M) calls upon the central government to rescind this decision.

In a Press Release, the General Secretary of the Communist Party of India (CPI) D. Raja denounced BJP government's decision to handover Indian Railways to private sectors. The statement reads:

The BJP led Modi government is determined to hand over all the national assets and resources to the private corporates. No sector of the economy and industry is spared. Coal mine, banks, defence, oil, insurance, electricity, telecom, space and atomic energy all are being privatized by the Modi regime. The latest target of privatisation is the Indian Railways. The BJP government has already decided to corporatise the production units under the Railways and to close down the printing presses of the Railways. The government has further appointed an Empowered Group of Secretaries for handing over passenger trains and railway stations to private sector. Accordingly on July 1, 2020 the ministry of railways have announced the following decisions.
Any private entity investing Rs. 30,000 crores will expect a huge profit from its investment resulting in huge increase in the railway ticket fare. Train which is the common man’s transport will go beyond his reach. Railways is not a commercial organisation. Railways are for serving the people of the country. The BJP government does not have any concern about the common people of this country. Already three lakh posts in Railways are lying vacant. These decision of operating 109 Trains through private agency will take away the dream of the Indian youth including of those who belong to the socially and economically downtrodden sections to get a Railway Job.
CPI condemns the anti-people decision of the BJP government and urges upon the government to withdraw its decision. CPI calls upon the railway employees, their trade unions and the people of the country to reject and fight against this retrograde decision taken by the Modi Government.