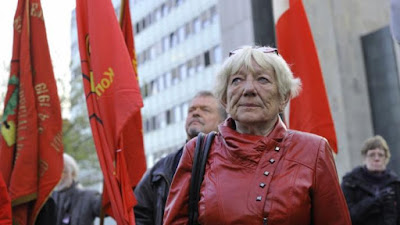 Betty was for many years member of the central committee of the old Communist Party of Denmark, DKP, before the foundation of The Communist Party in Denmark
Besides the work in the party Betty was also very active in many popular organizations and for some time elected member of the municipal council in the capital of Denmark.
International relations have always played a big role for Betty. She participated actively in all the International Meetings of Communist and Workers Parties, IMCWP, from the first meeting to the meeting in 2015.
Politically Betty always stood for a firm revolutionary policy regardless of the difficulties that the communist movement in Denmark as well as in many other countries have had.
To the strict political work of Betty, it is also remarkable that she always had time to help comrades with all kind of problems
For the Communist Party in Denmark it is a big loss that Betty is not here anymore but we will never forget her and all what she has done for the party and for the working class in the struggle for socialism and communism.