D. Koutsoumbas: "Solidarity to the heroic people of Cuba who fight to defend their homeland" 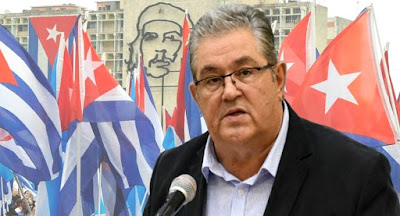 Three years have passed since the death of Fidel Castro on November 25, 2016. On this occasion, the memory and political legacy of the historic leader of the Cuban Revolution was honored on Saturday afternoon, during an event organized by "New Star cinema" in Athens, Greece.

Speeches about the life and polical activity of Fidel were delivered by the Ambassador of Cuba in Greece Zelmys Maria Dominguez Cortina and the Professor of Contemporary History at the Aristotle University of Thessaloniki Giorgos Margaritis.

"On the occasion of today's event for the three years since Fidel Castro's death we would like to express our strong protest for the criminal blockade against the people of Cuba that has been imposed by the North American imperialism for many years now.

We want to express our solidarity to a heroic people who fight with tooth and nails in order to defend their homeland, for popular prosperity, for the people's sake, for Cuba's citizens".