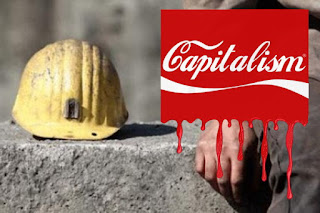 "Our co-workers are executed in cold blood" points out a recent statement issued by the Executive Secretariat of the All-Workers Militant Front (PAME) in Greece, regarding the new occupational "accidents" in the country.

It must be noted that on August 1st, two workers were killed and two were severely injured during work inside a biological waste treatment shaft in the town of Skala, in Laconia, Peloponnese. A 51-year old worker was cleaning the shaft when he started having breathing problems and called for help. A 37-year old Greek rushed to his assistance and jumped in the pit but he also felt unwell. Two more men, a 66-year old and a 22-year old who jumped in the pit also suffered from respiratory problems. Furthermore, two firemen and one policeman who participated in the efforts to save the men were also treated for breathing problems.


Other recent victims of occupational murders include a 43-year old fishery worker in Magnisia, central Greece, as well a worker at the Corfu airport.

"The worker isn't a number in statistics", writes the PAME statement and continues: "These colleagues will not go back to their families. They can't anymore dream and struggle for a better world and a decent life for their children".

"Capital kills. It does not care about the life of the workers. Above all, it has one god, the profit. That is vefiried by the 6,515 occupational "accidents" that took place only in 2016, 73 of which were fatal".

"It means that it is cheaper (for the employers) to have the workers killed, as long as they do not take the necessary measures for their safety", stresses out the PAME statement and adds: "The occupational murders bear a political seal. They are premeditated. They are the antiworkers policies which sweep the labor rights, which increase exploitation in the working places, with endless 12-hours long labor in miserable conditions, without any measures of hygiene and security, with hunger wages, under the terrorism of the employer...".

The statement of the All-Workers Militant Front (PAME) strikes against the current SYRIZA government, as well as the previous ones: "All the New Democracy, PASOK governments, as well as the current SYRIZA-ANEL one, offered with their laws a free field for the activities of business interests, they offered free and flexible labor. They removed whatever "prevented" their profitability. They handed over (public) Health to the private capital and the working class is paying a very high price."

PAME demands the legal punishment of the employer-contractor of the biological waste treatment shaft in Skala, as well as compensation to the families of the murdered and injured workers. Stating that "the life and health of the working people is more valuable", PAME also presents a list of demands to the government and calls the working class people to invigorate their fight for their rights.