KKE: Statement regarding PM Tsipras' remarks on the refugee-migrant crisis 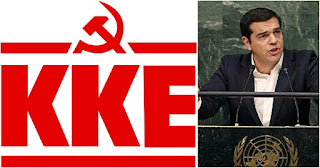 Regarding the speech of Greek Prime Minister Alexis Tsipras at the 71st UN General Assembly- and his remarks on the refugee crisis- the Press Office of the CC of the Communist Party of Greece issued the following statement:
"The Prime Minister not only didn't find a word to say about the real causes and those responsible for the wars and the refugee crisis in our region, but, furthermore, he justified the violation of the refugees' rights and of the Geneva Convention by adopting the arguments of the imperialist staffs about the "maintaining of social cohesion" and "public safety".
However, the refuge isn't a natural phenomenon; it is caused by the imperialist war, the antagonisms between the powerful ones, the poverty that capitalist exploitation creates.
Moreover, he (Tsipras) praised the EU-Turkey agreement, which his government voted and applies; this agreement is responsible for the entrapment of 60,000 people in Greece, at the same time when the government denies the transfer, from the islands, of the double entraped refugees and immigrants who live in miserable conditions- a fact that triggers desperate reactions such as the ones in Moria, Lesbos and in Chios.

Deriving from this unacceptable situation, the negative consequences in the life of people living in the islands are being exploited by the Nazi Golden Dawn and other far-right bullies".