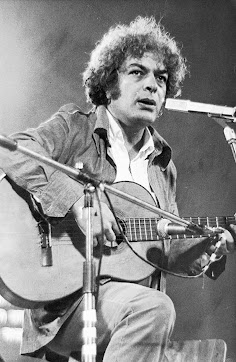 It was on 17 September 1982 when one of the most talented Greek composers of his generation passed away. After suffering several strokes Manos Loizos died in a Moscow hospital. He was 45 years old. Loizos wasn't just an extraordinary songwriter and composer; he was a member of the Communist Party of Greece and an outspoken critic of the Greek military Junta.
A self-taught musician with an inherent talent, Manos Loizos was born on 22 October 1937 to Cypriot parents in Alexandria, Egypt. He moved to Athens at the age of 17 in order to study pharmacology but soon he gave up his studies- his passion was music. His first recordings were made in 1963 and by the mid-70s he was one of Greece's most popular composers. His songs touched the hearts of the working class people and many of them became symbols of the anti-dictatorship struggle in the 1970s.

Being a versatile musician, Manos Loizos wrote some of the most memorable Greek political songs, as well as some extaordinary melodies of the so-called "Laiko" (Greek popular songs) music genre. Some of the most significant Greek singers, being in their first steps as young performers, became broadly known through their collaboration with Manos Loizos, including Haris Alexiou, George Dalaras, Vasilis Papakonstantinou, Dimitra Galani, etc.

Below we choosed and present five of Manos Loizos' most memorable songs:

1. "Pagose i tsiminiera" (The chimney got cold). Lyrics: Fondas Ladis. Performed by George Dalaras, 1976. The song refers to workers' strike.
The chimney is cold
and outside the gate
the factory workers are debating
The day has grown bright,
with frostbitten lips
they take up the banners and set out
Five trucks they sent out,
at the waning of the moon,
and they came back full of strike breakers.
[Still] filled they went away again:
"Nobody will get through
we had better all go away as emigrants!"
A month has passed,
the machines are rusting
and the children suffer cold and hunger;
in the streets of Athens
workers are handing out fliers
asking for support.

In my old neighbourhood I had a friend
who knew and was playing the accordion
when he sang, he was like the sun
fires in his hands were ignited by the accordion
But one dark night, like every other night
he kept look-outs, playing the accordion
fascist vans stood next to the pen
and a gunfire stopped the accordion
The already started slogan always comes back to me
whenever I hear again an accordion
and it has, like a stamp, marked my life
'fascism will not pass!'