Communists of Luxembourg mark the 100th anniversary of their party's foundation 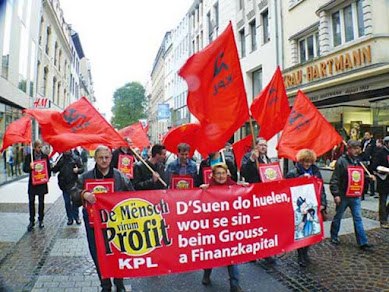 100 years ago, on 2 January 1921, the Communist Party of Luxembourg (KPL) was founded in the working class town of Differdingen in the south of the country. Immediately after its constitution, the party took up the struggle for the rights of the working class, especially the miners and steelworkers in Luxembourg, and many members of KPL proved themselves in demonstrations and strikes.
In the 1930s, the KPL engaged in the struggle against rising fascism in close cooperation with the sister parties of neighbouring countries. In the Spanish War, communists and numerous anti-fascists from Luxembourg provided a strong contingent of the International Brigades for the defence of the Republic against the Spanish, German and Italian fascists.
Read more »
Posted by In Defense of Communism