On Tuesday 14/6, the MPs of the Communist Party of Greece (KKE) demanded the withdrawal of the despicable legislative amendment concerning the sell-off of the large nickel processing enterprise of LARCO. During the debate in the Plenary Session of the Parliament, the KKE MPs conveyed the demands of the workers of LARCO, who, together with thousands of other workers, demonstrated outside the Parliament chanting “Hands off LARCO”.

The KKE requested a roll-call vote on the amendment. This initiative aimed on the one hand to upset the plans of the government to pass it on the sly and on the other hand to expose those who will vote for this shameful amendment to the people.

During the debate, the government attempted to present LARCO, this industrial giant that could contribute to the development of the productive potential for the benefit of the country, as a millstone around the country’s neck and this amendment, which clearly provides for the workers’ dismissal and eviction from their homes, as their ‘salvation’ and ‘protection’!

At the same time, SYRIZA and KINAL/PASOK pretended that they were not aware of this crime, even though they had put their stamp on every negative development when in government, since their driving force was the same strategic plan as the one that is currently being promoted by the ND.

The KKE MPs denounced the amendment, provided concrete facts about the huge potential of LARCO, and highlighted the heavy responsibilities of all governments over time. They called upon the workers to continue their heroic struggle, of which the communists will continue being at the forefront, for the continuation of the operation of LARCO, its modernization and development, the safeguarding of all the rights of the workers and all job posts, and health and life protection measures.

Addressing the Parliament, the GS of the CC of the KKE noted that LARCO is not a millstone around our neck but a treasure and demanded that this monstrous amendment be withdrawn.

D. Koutsoumbas referred to the anti-labour policy pursued by all governments and their machinations for the depreciation and privatization of the enterprise. He called upon the workers to continue their heroic struggle for work, progress, and better living conditions. 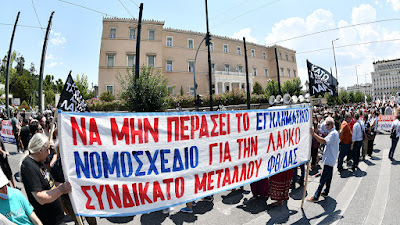 The GS of the CC of the KKE underscored among other things that “in the direction of utilizing the potential of LARCO and the mineral resources overall, all the rights of the workers, as well as humane and decent work conditions, can be safeguarded.

This orientation in the operation of LARCO and the utilization of the mineral resources is, as we know, in conflict with the profits of the few to the detriment of the many, that is, with the capitalist profit and the relations of production serving it.

That is why today it is more than mature —in our opinion— for LARCO and all the mineral wealth, all those concentrated means, to become social ownership. That is the only way, combined with the central scientific planning, the workers’–people’s control, and the participation by the producers of the wealth themselves that provides a prospect of true prosperity for our peoples, the LARCO workers, and their children.

The fact that we have such a comprehensive proposal enables us to consistently stand against your criminal plans, demanding the funding and modernization of the enterprise under the responsibility, planning, and control of the state as well as its further development according to its potential, which is truly great.

We support the great struggle of the workers with all our might. We continue to demand the continuation of LARCO’s operation and the safeguarding of all job posts”.