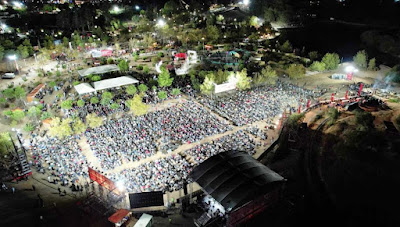 Twenty-five delegations of Communist Youths from around the world attend this year's festivities.

Under the slogan "Live, dare, move on - for the society of true freedom, Socialism", the annual festival of the Communist Youth of Greece concludes its journey in Athens with a three-day events (23, 24, 25 September).

The General Secretary of the CC of the KKE Dimitris Koutsoumbas and the Secretary of KNE Nikos Abatielos will be the speakers at the major political event on Saturday 25 September.

Drone views from the first day of the Festival