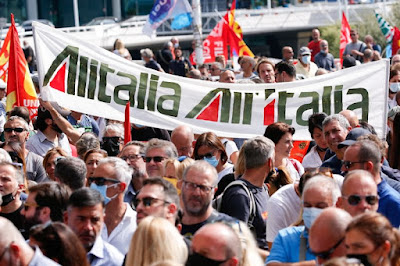 "Alitalia workers are determined to carry on the fight until Altavilla (President of ITA) and the government withdraw and re-discuss the scandalous industrial plan presented in compliance with the wishes of Brussels and the ultraliberal doctrine of Draghi, not surprisingly honored with a standing ovation by the assembly of Confindustria", reads a statement by Unione Sindacale di Base (USB).

"USB will never leave Alitalia workers alone, firmly asks for the protection of contracts and rights, starting with the full payment of wages, says no to Altavilla and his plan which is nothing more than a social experiment carried out by a company entirely public to dismantle the residual labor protections. The fight goes on", the statement concludes.