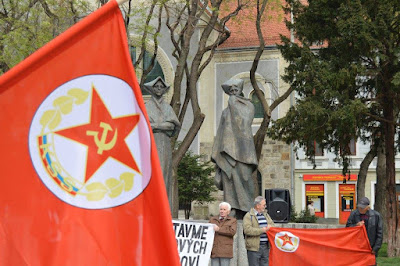 "The Museum of the Slovak National Uprising in Banská Bystrica symbolizes the courage and heroism of the Slovak people, who resisted Nazi enslavement and rebelled against the Nazi occupiers. Historical facts about the entire anti-fascist movement in Slovakia, as well as the preparation of an armed action against fascism and its domestic collaborators at the end of August 1944, are clear evidence that the Communist Party was one of the main organizers of the anti-fascist resistance. Whether someone likes it today or not, it was mainly the communists and their family members who cruelly paid for their actions and attitudes and paid for the most valuable – with their lives."

Refering to its exclusion from the official commemoration events, the Party points out:

“We consider the decision to hold the celebrations of the 76th anniversary of the SNP in a very limited way from the point of view of the COVID-19 pandemic to be acceptable and we fully respect it. However, we cannot agree with the statement that another reason why the KSS delegation cannot participate in the official act of reverence is the apolitical nature of the SNP celebrations. The SNP celebrations have never been and will never be apolitical. We consider it ridiculous to say that the act of reverence, as well as the whole commemorative celebrations of the SNP, have nothing to do with politics.”

The Communist Party of Slovakia (KSS) expresses its dissapointment for the decision of the SNP Museum, stating that the Museum's officials were "apparently forced to carry out orders or guidelines that we believe are contrary to democratic and moral principles".