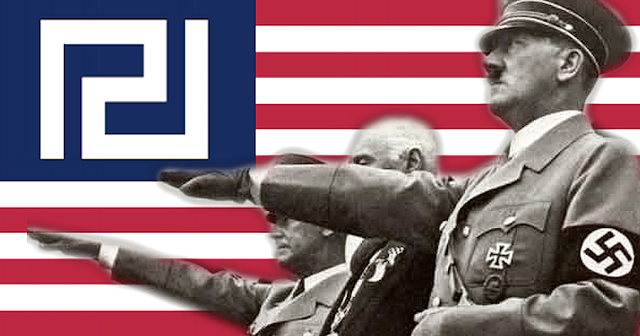 Special to In Defense of Communism.

In our post titled “Golden Dawn's Neo-Nazis's admiration for Donald Trump” (April 6) we had described the public admiration that known members of the Greek fascist organisation had expressed for the US Presidential candidate Donald Trump. There is plenty of evidence which shows a connection between far-right, fascist and racist groups in the two sides of the Atlantic; more specifically between American White supremacists and Greek neo-Nazis.

Before going to the ties of Golden Dawn's Nazis with US fascist groups, lets go back to June 2015 when 59 year-old John Russel Houser opened fire at a movie theater in Lafayette, Louisiana. Two women, aged 21 and 33, were killed as a result of this. According to police investigation, Houser had a history of far-right ideas, being a member of the ultra-conservative Tea Party and an admirer of Adolf Hitler and Timothy McVeigh. A research on the web unveiled that, in one of his comments, Houser had praised Golden Dawn. Here is the part of his reference to the Greek nazi-criminal group:


The WSJ had an article about a group named Golden Dawn.They believe that Greeks should rule greece, including deciding if any other type of person should also live there.I found their website. The videos told me that this is a legitimate effort to solve problems.The leaders of the group are in fact leaders.Intelligent,well spoken,and exercising good faith.The straight forward approach of the group is a result [I learned reading on their webpage] of Greece being in exactly the same political and economic situation as the US.Put another way,the US needs a Golden Dawn organization.That was the basis of the WSJ article.GD has opened an office in New York.

The relations between Golden Dawn's Nazis with American far-right, racist groups is not a new issue. A characteristic example is the promotion by Golden Dawn of the so-called “Turner Diaries” written by the american white nationalist William Pierce (1933-2002), founder and leader of the fascist-racist group 'National Alliance'. The “Turner Diaries”, written by Pierce under the pseudonym “Andrew McDonald”, is a 1978 explicitly racist novel. McVeigh, convicted for the 1995 Oklahoma city bombing, was found after the attack with pages of this book.

Golden Dawn maintained ties with National Alliance. On autumn 1998, Pierce was invited by the Greek neo-Nazi group in Thessaloniki in order to talk to a secret fascist gathering. According to the “newspaper” of Golden Dawn (6.11.1998), Pierce had “extensively analyzed the means with which the White man must face the new millennium” and reminded that “our aim is to reach the racial archetype of Nietzsche's Übermensch (Superhuman)”.


A FEW WORDS ABOUT 'GOLDEN DAWN'.

'Golden Dawn' is a bourgeois, criminal-Nazi organisation which presents itself as a "nationalist" political party. Leading members of Golden Dawn have been photographed with portraits of Hitler, Goebbels and the swastika, while in the past the party's official magazine included hymns to Nazis and the Third Reich.

Golden Dawn's members have been prosecuted for numerous attacks on immigrants as well as Greek citizens; on September 2013 a member of the Nazi organisation, G.Roupakias, murdered anti-fascist musician Pavlos Fyssas in Piraeus, while a few days before a group of Golden Dawn's thugs attacked and seriously injured members of KKE and PAME.

Golden Dawn- a political puppet of the big capital and the shipowning industry - currently holds 18 seats in the Greek Parliament.


TRUMP'S RACISTS AND THE NAZI CRIMINALS OF GOLDEN DAWN.

The connections between Golden Dawn and fascist-racist groups from the United States have expanded during the last years. Another characteristic example is the mutual admiration between the Greek Nazis and the notorious Ku Klux Klan (KKK). On September 2012, the website of “The Knights Party” had published an article refering to the opening of Golden Dawn's New York City branch. Recently, a leading member of the “Knights Party”, Rachel Pendergraft, said that Donald Trump is a great recruiting tool for KKK.

From their side, as we pointed out in a previous article, Golden Dawn has publicly praised Donald Trump: ”The candidate for the republican nomination, Donald Trump, hasn't stop telling truths which exceedingly annoy the american-zionist establishment" (Golden Dawn's official site, 23.4.2016).

The admiration of the Greek Nazi group for Trump is not a surprise. On March 11, the Greek newspaper “Real News” published a report regarding a visit of american white supremacists in Athens after an invitation by the Golden Dawn. Below you can see photos from the meetings between Golden Dawn's leadership and representatives of the so-called “Traditionalist Workers Party” and the “White Student Union”.

In these photos we see white supremacist and outspoken Trump supporter Matthew Heimbach. For those who don't know, Heimbach and his fascist group has been implicated in various incidents of bullying and violence against African-Americans. On March 1, Heimbach and several other facsists ferociously attacked an African American woman at a Trump rally in Louisville, Kentucky. The victim, identified as University of Louisville student Shiya Nwanguma, told reporters that she was verbally abused during the rally before being violently ejected.

On June, the Traditionalist Workers Party- along with other racist groups- sparked violence in Sacramento, clashing with anti-fascist protesters. According to Southern Poverty Law Center, since Summer 2013 Heimbach has been wading into neo-nazi territory. More specifically: “He spoke at the annual Stormfront gathering in Tennessee, where he sang the praises of neo-Nazi David Duke (the former Grand Wizard of KKK who publickly endorsed Donald Trump). This followed a late August interview on Duke’s radio show. Heimbach took an even more extreme turn the next month when he participated in a gathering hosted by the violent skinhead group Aryan Terror Brigade and co-hosted by the Imperial Klans of America and the National Socialist Movement. The event included a cross and swastika lighting”.

In an interview to ABC in 2014, “little Furher” Heimbach is shown wearing a t-shirt with Golden Dawn's logo. The same guy attended Golden Dawn's conference in New York and has been interviewed by Golden Dawn's fascists in a video uploaded by the neo-Nazi "Nationalist Socialist Movement" on YouTube.

CONCLUSION: "FASCISM IS CAPITALISM IN DECAY".

Golden Dawn is a Nazi-Criminal gang posing as a political party. It consists a tool in the hands of Greek capitalists, in their effort to terrorize the working class movement. Golden Dawn- like other similar fascist groups- is the watchdog of the big Capital:  It pushes and leads it members into committing crimes against immigrants, workers, trade unionists, anti-fascists, communists, while in Parliament they promote the interests of shipowners, industrialists and monopolies. Golden Dawn's fascist thugs are ideological siblings with America's white supremacist, racist and fascist groups- they share an admiration for Nazi Germany and maintain a racist, intolerant ideology against immigrants, refugees, blacks, asians, LGBT people.

Donald Trump- a billionaire and prominent representative of U.S. bourgeoisie- uses his bigoted demagoguery in order to attract such forces. He has been supported by numerous racist-white supremacist groups, including the abovementioned 'Traditionalist Workers Party'.

The working-class people, in Greece, in the United States and everywhere, must isolate the fascists and turn their backs to the demagoguery of racist hate speech. Fascism is a product of Capitalism's decay- "the most naked, brazen, oppressive, and deceitful form of Capitalism" according to B.Brecht- and as such it must be decisively confronted.