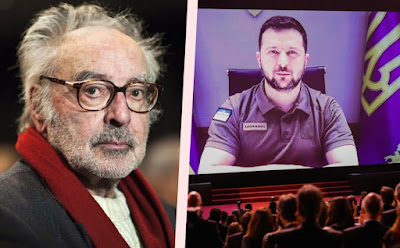 "Zelensky's intervention at the Cannes festival goes without saying if you look at it from the angle of what is called "staging": a bad actor, a professional comedian, under the eye of other professionals in their own professions. I believe I must have said something along these lines a long time ago. It therefore took the staging of yet another world war and the threat of another catastrophe for us to know that Cannes is a propaganda tool like any other. They propagate Western aesthetics what…

Realizing it is not a big deal but it is already that. The truth of the images advances slowly. Now imagine that the war itself is this aesthetic deployed during a world festival, whose stakeholders are the states in conflict, or rather “in interests”, broadcasting representations of which we are all spectators… you like me. I hear that we often say “conflict of interest”, which is a tautology. There is no conflict, big or small, unless there is interest. Brutus, Nero, Biden, or Putin, Constantinople, Iraq or Ukraine, not much has changed, apart from the mass murder.“