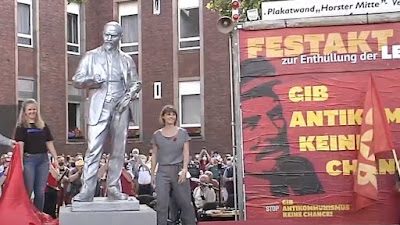 Great news from Germany as the much-awaited statue of Vladimir Lenin was unveiled today, Saturday, during an event held in the city of Gelsenkirchen.

The initiative for the installation of the 2-meter (6.5-foot) statue, which was originally made in the Soviet Union in the 1930s, belongs to the Marxist-Leninist Party of Germany (MLPD).

The MLPD had to overcome multiple obstacles before the installation of the statue, as the local council attempted to block the process.

In a previous article, published on March 7, we were writing that the local council of the West Gelsenkirchen district had “resorted to blatant anti-communism and slanders against Lenin” characterizing the great revolutionary an “inappropriate figure to be commemorated in the city”.

However, the persistence of German communists and especially of the MLPD led to the overcoming of restrictions and the subsequent court’s decision to allow the erection of the statue.

“The time for monuments of racists, anti-semites, fascists, anti-communists and other relics of the past has clearly passed”, said Gabi Fechtner, the MLPD chairwoman, adding that “Lenin was an ahead-of-his-time thinker of world importance, an early fighter for freedom and democracy”.