The Party calls the removal of Konev's statue a "brutal and amoral act" and urges the people of the country to express their disagreement with this decision. KSČM demands from the Czech government to restore the statue immediately, while members of the Party organized a protest in the square where the statue of Konev was located.

The Secretariat of the European Communist Initiative condemns and denounces to the peoples of Europe the provocative and abominable action of the local authorities of Prague 6 to remove the statue of Soviet General Ivan Stepanovich Konev, who led the Red Army forces that liberated Prague and a large part of Czechoslovakia from the Nazi yoke.

Taking advantage of the restrictions on movement due to the coranavirus pandemic and apparently with the support of the Czech government, the city authorities proceeded to remove another Soviet monument, a symbol of the anti-fascist struggle of the peoples.

We are adding that it is unbelievable and shameful that the government authorities, under such extraordinary circumstances and despite their responsibility should now be to deal with the coronavirus pandemic around the clock, are spending their time and energies to such actions distorting history.

It is another anti-communist act encouraged by EU anti-communism and the recent outrageous European Parliament resolution. It is an insult to the Czech people and their contribution to the anti-fascist struggle as well as to the memory of the 140,000 Red Army soldiers who fell in Czechoslovakia. They are wrong if they believe that with such obsenity and much more like a thief and away from the people, they will rewrite History that was irrevocably written with the blood of the peoples.

We demand that this unacceptable decision be revoked immediately and that the statue of General Konev be returned to its place. 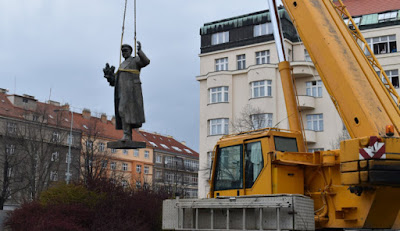 While all over the world - despite the Corona pandemic - the memory of the 75th anniversary of the liberation of Europe from fascism and war is kept alive, commemorating the victims and honoring the liberators of the anti-Hitler coalition, a Prague district government is indulging in a political scandal that cannot be surpassed in its provincialism and small-mindedness.

Despite international protests and interventions, including to the Czech state government, on Friday 3 April the monument of Marshal Konev, who as supreme commander had achieved the military liberation of the Auschwitz extermination camp and Czechoslovakia, was dismantled and transported away. Only a few weeks ago, on 27 January 2020, Czech anti-fascists have honored Marshal Konev at this memorial in memory of the victims of the fascist extermination policy.

Obviously, the district government tried to use the exceptional situation because of the health-related initial restrictions to carry out this desecration of the monument without public protests. Apparently, they wanted to prevent that on the liberation day of the Czech capital or on Victory Day thousands of Prague citizens would again make a pilgrimage to this monument and commemorate the liberators with flowers and other honors.

Following on from the scandalous declaration of the European Parliament on 19 September 2019, which was used as a legitimation, particularly in the Baltic States and in Poland, to remove monuments of remembrance of the liberators, we are now witnessing another appalling example in Prague of the consequences of this historical revisionism.

The FIR and its member federations are however sure that the Czech anti-fascists and many citizens will retain the memory of the liberators despite this outrage and will remember in worthy public forms Marshal Konew and the thousands of fighters in the ranks of the Red Army, who accomplished the liberation achievement.