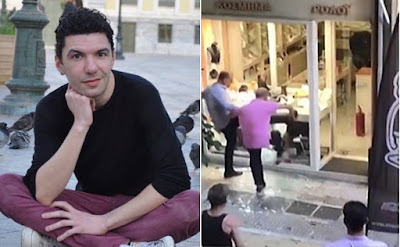 In a statement regarding the lynching of social activist Zak Kostopoulos in downtown Athens, the Press Office of the CC of the Communist Party of Greece issued the following statement:

"The incident of Zacharias (Zak) Kostopoulos' brutal beating, which led or contributed to his death, is deeply disturbing. The "lynching", especially against a socially vulnerable person who didn't consist a serious threat to anyone, simply and solely for the suspicion of robbery, as it happened in this case, is not only an unacceptable and condemnable incident, but consists an act of barbarity".

The KKE also points out that "the broader effort to absolve and encourage such unacceptable acts supposedly in the name of 'self-defense' which comes primarily from fascists, is also dangerous and must be decisively condemned".

The statement writes that "the case must be thoroughly investigated and all those responsible must be punished. Above all, there is a need for state support towards all these people that are becoming vulnerable and marginalized by the rotten exploitative system".

* * *
THE LYNCHING OF ZAK KOSTOPOULOS

LGBTQ+ activist and performer Zak Kostopoulos, 33, was beaten to death in front of a jewellery store at Glastonos street near Omonia Square in downtown Athens. The incident happened in a bright day last Friday, September 21st.

The mass media have presented Kostopoulos' lynching and subsequent murder as some form of accident which took place when the jewellery owner tried to "protect his property". However, the brutal video that has been published (watch below) shows that a disoriented, unarmed young man is trying to escape and the shop owner, alongside another man, brutally kicking him to death.

Contrary to the media's version that Kostopoulos was trying to rob the store, Zak's friends and fellow activists say that he entered the shop in an desperate effort to seek protection from some brawl that was taking place nearby and trapped when the store's security door closed automatically.

The disturbing video shows Zak, who was struggling to stand on his feet, exiting the store after breaking the window with a fire extinguisher. The shop owner and another man started beating him viciously while onlookers were watching. Instead of arresting the assailants who were lynching Zak, Greek Police handcuffed Kostopoulos who was lying beaten on the street.

The jewellery shop owner, a 73 year-old man, got arrested only after the video went viral. According to the media he has been charged with manslaughter rather than with murder.

Zak Kostopoulos was a known activist and drag performer who had struggled against prejudice suffered by HIV positive people.