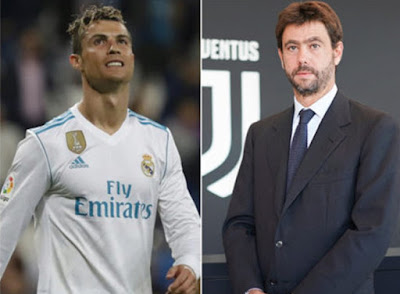 Like all capitalists, Agnelli resorts to the economic crisis in order to cut salaries or to send hundreds of workers to unemployment. Nonetheless, the Italian billionaire had no hesitation to spend more than $120 million in order to buy a football player!


Is this fair? It is normal for one person to earn millions, while thousands of families can’t even get to the middle of the month?" writes a statement by Sindacale di Base which represents thousands of Italian employees and adds: “We’re all employees of the same owner, but this difference in treatment cannot and must not be accepted."

The union said has stated that signing the Portuguese striker is symbolic of the skewed priorities at Exor, the holding company that owns both Juventus, which has recently ridden a wave of success, and Fiat, whose share of the car market has steadily declined.
From its side, the Sindacato Intercategoriale Cobas (SiCobas Union) has already circulated a poster with Cristiano Ronaldo and the message: "We are the ones who pay for you". The sum of money that Juventus plans to pay Ronaldo would be enough to “give every worker an extra €200 ($234) a month” said Gerardo Giannone, representative of the workers at Fiat's plant in the town of Pomigliano. 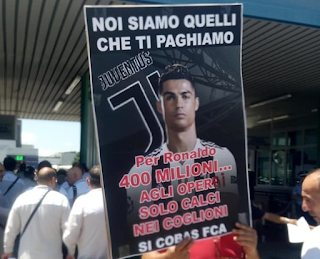 “We’re told that times are tough, that we need to resort to social safety nets, waiting for the launch of new models, which never arrive," said the union.
“And while the workers and their families tighten their belts more and more, the company decides to invest a lot of money on a single human resource! The Fiat workers have made the company’s fortune for at least three generations, but in return they have only ever received a life of misery."
“Fiat workers have not had a pay rise in ten years”, Giannone points out, calling the company’s decision to co-fund Ronaldo’s transfer “a shame.”“In the last ten years, we have lost 10.7 percent [of our wages] to inflation,” he added.
As a response to the decision of Agnelli, the unions have decided to call the workers at Melfi plant in southern Italy to strike between Sunday, the day of the World Cup final, and Tuesday evening.
They must have our full support and solidarity.
IN DEFENSE OF COMMUNISM ©