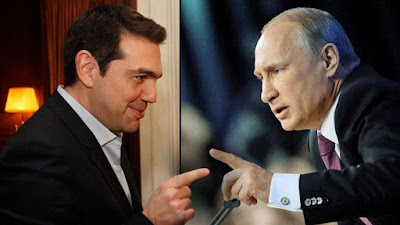 According to TASS news agency, Moscow has expressed strong protest to the Greek ambassador to Moscow regarding the expulsion of Russian diplomats and anti-Russian statements made by Athens, the Russian Foreign Ministry said in a statement.

"On July 20, the Russian Foreign Ministry summoned Greek Ambassador to Russia Andreas Friganas to strongly protest against the anti-Russian statements Greece has been making regarding the expulsion of two Russian diplomats and the entry ban another two Russian were issued," the statement reads.

On July 11, the Greek Kathimerini daily had reported, citing diplomatic sources, that Athens had decided to expel two Russian diplomats and ban another two from entering the country. According to the daily, Athens accused the diplomats of interfering in the country’s domestic affairs and undermining the national security of Greece. More specifically, the publication had claimed that the diplomats attempted to intervene in a domestic issue, namely the negotiations between the governments of Greece and the Former Yugoslav Republic of Macedonia (FYROM) over the years-long naming dispute, which resulted to an agreement between Skopje and Athens last month.

From its side, the Russian Foreign Ministry stated that the Greek side had provided no justification for the expulsion of the Russian diplomats from Greece, emphasizing that Moscow considers the incident absolutely groundless. "It appears that Washington, which openly supported these actions in the statement made by the State Department, is behind this anti-Russian move by the Greek government, timed specifically to coincide with the opening of the NATO summit," the ministry said in a statement on July 13th.

The spokeswoman for the Russian Foreign Ministry Maria Zakharova said that actions similar to the expulsion of Russian diplomats from Greece do not remain without consequences. "Such things do not remain without consequences, do not disappear without a trace. Of course, unfortunately, all this darkens bilateral relations, without introducing any constructive principle," she added.

Commenting on the diplomatic row between Athens and Moscow, the Press Office of the CC of the Communist Party of Greece (KKE) pointed out that "the crisis in the Greek-Russian diplomatic relations is a result of the overall increasing competition between USA-NATO and Russia, but also of the choices of the SYRIZA-ANEL government to play the role of "flag-bearer" in the US-NATO plans".

The KKE also mentions that this development highlights again that the involvement of Greece in the imperialist competitions and plans, with the government's responsibility and for the benefit of the Greek capital, poses great dangers for the Greek people.