England has for many years been plagued with an unwanted menace, growing like cancer across its green fields and spilling over into its towns and cities. It began in the summer of 1949 when two groups of American B29 bombers arrived supposedly for “training purposes.” It was a short stay, the government said — they soon would be leaving us.
73 years later and our country is occupied by 24,000 US military personnel, civilian staff and their family members, stationed across 13 US bases (down from 100 in the 1990s). The counties in the East of England are host to three of these bases: RAF Feltwell, RAF Mildenhall and RAF Lakenheath, with the latter being the largest US Air Force base in Britain, home to fighter jets used in recent conflicts such as in Libya, Afghanistan and Iraq.

While some people have fallen hostage to the typical rhetoric of American occupancy, believing that housing their many instruments of war somehow provides safety for the area and contributes to the local economy, many others deny this — and in 2008 110 US free-fall nuclear bombs were reportedly withdrawn following consistent anti-nuclear protest by CND and local campaign groups.

Unlike their parents, the youth of Britain have fortunately spent the past 14 years without the threat of nuclear annihilation next door to them. But recent reports have revealed that the US Department of Defense has added the UK to a list of NATO nuclear weapons storage locations in Europe, with multi-million-dollar infrastructure upgrades.

While it’s unclear whether nuclear weapons have already been returned to the base yet, or whether they are being prepared to receive them shortly, what is known is that in December 2021, Lakenheath received the F-35A, the latest nuclear-capable fighter plane, with a total of 24 expected to be stationed there. Where they go, nukes won’t be far behind.

The dangers involved in their return are grave — there have already been two nuclear accidents at Lakenheath in the past.

Atomic bombs were hosted there as early as 1956, supposedly as a precaution in case of war with the Soviet Union and stored in specially designed igloo-like bunkers. On July 27, 1956, a B-47 was doing a routine training flight, before returning to Lakenheath to practice “touch and go” landings. It made three successful ones, before the fourth turned to disaster and the aircraft lost control, sliding off the runway and crashing into one of these bunkers containing three Mark-6 nuclear bombs, tearing through the bunker and hitting the bombs, with the aircraft exploding and showering burning fuel everywhere.

The fire was put out and the nukes inspected, with fire damage and dents. It was a miracle that one of them wasn’t ignited — if they had all detonated this would have resulted in 6,800kg of high explosives scattering depleted uranium over a large area, taking out the base and poisoning the area for many miles. Toxic dust would have caused major health problems to thousands of people in the East of England for many years. The nuclear cores were stored within a separate bunker, and if that had been struck instead it’s likely that a large cloud of plutonium would have been released, causing even more catastrophic implications.

A senior US official at the time was quoted as saying “it is possible that a part of Eastern England would have become a desert”. Mass panic on the base was reported, with American Women & Children packed into taxis, their drivers instructed to take them anywhere by Lakenheath.

Lakenheath was then the site of a second nuclear accident in January 1961, when a US F-100D Super Sabre aircraft was sat on the runway, armed with a Mark 28 hydrogen bomb. Its pilot accidentally jettisoned its fuel tanks which ruptured as they struck the concrete, igniting the fuel, engulfing the bomb and scorching the casing, before being put out prior to an explosion occurring. It was later discovered via faulting wiring that prolonged heat could cause the circumvention of the weapon’s safety mechanisms, causing a nuclear detonation.

These two close calls alone should have been an end to not only the storage of US nuclear weapons, but for the occupancy of American troops as a whole. It is only due to NATO membership that these nuclear weapons are returning and at a time when this would put Britain on the front line in a war between NATO and Russia.

With little to no control over what the US does within these bases, their actions go wholly against the sovereignty of the British people, putting our lives in danger as cannon fodder for the US war machine. 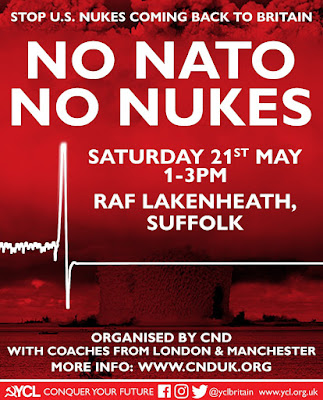 Beyond the threat of being annihilated in a nuclear conflict, the US bases have been terrible for the local population in the neighbouring villages, towns and cities. American soldiers are world renowned for their violence and arrogance when occupying foreign countries and things are no different here.

And, subsidised by the billion dollar military budget, they have also driven rents up, with locals being priced out of their homes.

While they remain here with their military bases, Britain will be a country under occupation. To quote the well-known Communist Party Historian from the East of England, A.L.Morton: “It is for us to say to these insolent intruders: GO HOME. YOU ARE NOT WANTED HERE.”

We demand of our government the immediate confirmation of whether or not Britain is to once again play host to US nuclear weapons and if so, we demand the immediate withdrawal of these weapons.

— Immediate withdrawal from NATO and the web of US imperialism.

— The removal of all US and NATO bases from Britain.

— Unilateral nuclear disarmament by the UK.

— Withdrawal of all UK military personnel from abroad and the closure of all foreign bases.

— A foreign policy which is based on peace, cooperation and international development, not war and extortion.

— The reallocation of the defence budget for peaceful purposes including health, education, housing and job creation.