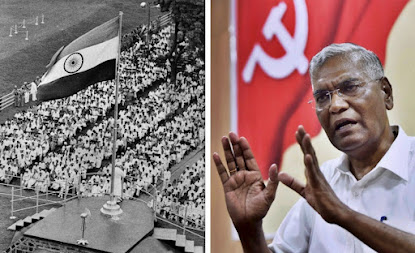 The struggles during this period were multifaceted. There was no singular method nor one universal demand. If there was anything in common, that was the urge for freedom. But this freedom meant different things for different sections of our society. For women it was freedom, self-respect and liberation from patriarchal subjugation of all kinds. For Dalits and Shudras, freedom meant liberation from thousands of years of exploitation and torture by Manuvadi Brahmanical hegemony. For tribal communities it was the freedom to claim forest land as theirs and freedom from ruthless forest contractors. Freedom from constant fear of displacement in the name of development.

For the minority religious communities, it was freedom from the fears of subjugation from majoritarian communalism and a right to practise their faith. There was an underlying stream of clear understanding that colonial rule was basically exploitative, constantly draining the country and drying out all its resources.

In the initial decades of the 20th century, when the movement for liberation was bringing communities closer, we saw Mohammed Ali Jinnah standing in defence of Tilak in sedition case and Bhagat Singh strongly arguing against communalism, Hindu majoritarianism or Hindutva. People saw Babasaheb Bhimrao Ambedkar making every effort to make his struggle for liberation from caste-based exploitation inclusive of women's liberation and against feudal economic exploitation by landlords. Dr Ambedkar led anti-feudal struggles in Konkan and other regions were so inclusive that the exploited from upper castes too participated in huge numbers and were beneficiaries when struggles led to successful outcomes. All these struggles should be seen in totality contributing to the freedom 75 years back apart from mass struggles led by Mohandas Karamchand Gandhi and Congress and from militant class struggles led by nascent communist movement and other radical revolutionary organisations and activists.

Independence of India from British rule was understood by the freedom fighters as not only freedom from British rule but also freedom from all forms of exploitations and oppressions which remained deep within the social structures indigenous to India. There was constant resistance from within to anything progressive, anything democratic, anything secular and anything against patriarchal Manuvadi social order. This resistance came from the orthodox and obscurantist sections of the society in a coalition with organised institutions of power like zamindars, feudal principalities or riyasats joined by the newly emerging affluent in colonial India.

All those who were against any movement even remotely progressive, democratic and inclusive have got one thing common — their loyalty towards British masters. Rashtriya Swayamsevak Sangh or the RSS that came into existence in 1925 has led to consolidation of all these reactionary, communal, Manuvadi forces in a big way. The RSS can be considered the largest pro-British and anti-people grouping of that time.

During the debates in constituent assembly, the attack on democratic values was carried out in different forms on different occasions. There was constant pressure from Hindutva forces to get India declared as a Hindu state. Examples from Ireland and other countries were constantly cited in support. Dr Ambedkar stood like a rock against all this. Dr Ambedkar emphatically rejected theocracy and warned that “if at all Hindu Rashtra becomes a reality that will be calamity for the nation.” The struggle of Indian people against the forces of reaction became more acute after independence. Mahatma Gandhi was assassinated by Nathuram Godse whose links with RSS and Hindu Mahasabha were well established. Gandhi's assassination is the beginning of consolidated and organised assault on secular values.

The staunch adherent of secularism that Dr Ambedkar was, he framed our Constitution in such a way as to protect the interests of all sections of the society. Starting from the Preamble itself, the values of our freedom struggle were enshrined in all parts of the Constitution and we got Fundamental Rights and Directive Principles of State Policy to protect us from arbitrary state action contrary to the spirit of the freedom movement and to guide our legislatures towards a welfare turn with non-discriminatory foundations thereby the Constitution makes it mandatory that Indian State should remain a Secular and Welfare State.

The able leadership of Dr Ambedkar had gone a long way to steer through the intricate, complex sometimes heated debates of constituent assembly and making a Constitution on time possible and at the same time not allowing the final outcome deviated much from the cherished goals of decades long freedom struggle that is democracy, secularism, anti-feudalism and egalitarianism. He outlined a path to develop our country along the lines of inclusiveness with social justice and socialism. It was not a mean achievement. The credit goes to Dr Ambedkar and his team for this singular achievement.

Let us remember also that on August 15, 1947 power to administer areas under direct British rule only was transferred. There were significant parts of country under the native rulers totaling more than five-hundred and included significantly bigger and contentious ones like Hyderabad under the Nizam and Kashmir under the Dogra ruler Hari Singh. From 1947 to 1950, founding leaders of our nation were occupied with the twin tasks of bringing all these into one country apart from shaping a Constitution. The constituent assembly of India was elected by the provincial legislatures and the then clandestine and largely underground Communist Party got little representation in it.

However, communists made them heard and shaped the agenda of the constituent assembly through militant mass struggles outside. As Sardar Patel himself once remarked to Chari, the famous lawyer from Bombay that the militant mass struggles led and organised by communists literally left not many options to the princes, Rajas or nawabs except accepting accession to Indian Union. The contribution of communist movement in the evolution and integration of Indian nation state can never be forgotten.

He also coined the inspirational slogan ‘Inquilab Zindabad’, popularized later by martyrs like Bhagat Singh. The demand for a constituent assembly was also raised first by communist M N Roy. It was the militant mobilisation led by communists that resulted in the Congress adopting complete independence as part of its agenda. These glorious contributions to the building of the Indian nation are still our inspiration in our unflinching struggle against the new forms of imperialism.

Freedom from British colonialism didn't mean the end of all nefarious designs by capitalist interests as they wanted to continue their stronghold on developing nations including India and their markets, resources and labour force. After the Second World War ended, the formal end of colonialism resulted in the beginning of a new phase of imperialist onslaught in collaboration with the rightwing forces of India. This attack is also multi-pronged. The imperial design in the region is on one hand trying to pressurise India by exposing it to external threats and by trying to constantly add fuel to any kind of divisive trends within country. The sustained imperial support for rightwing forces in country has enabled them to widen the fault lines of our society.

During the last three decades we have seen a constant process of privatisation, commercialisation and liberalisation of our labour and capital markets, constant process of yielding to pressures of WTO or other such bodies and bringing disastrous economic changes to suit the dictates of finance capital. The current RSS-BJP combine regime is moving or literally galloping towards complete corporatisation of everything from agriculture to education to health. This regime is forcing India into an irreversible strategic partnership with America, thus killing everything progressive and democratic in our foreign policy. The Marxist emphasis on the inseparable nature of economics and politics proves correct in this context as the growth of finance capital in India has been concurrent with extreme polarisation on religious and caste lines.

We see chaos and all-pervasive crisis around us as we approach the 75th anniversary of our independence next year for which the government has made an elaborate committee. The constitution of such committees remains a façade when the state is eating away day-by-day our independence, the Pegasus incident just being one recent example. The current regime has done so much to undermine our precious independence and values attached with it that we need to wage a new freedom struggle to take back our freedom from the RSS and its Hindutva agenda. We should prepare and commit ourselves to that struggle as the Left has done during the freedom struggle. Our heroic past of committing ourselves wholly to the service of the nation and organising its workers and peasants against imperialism is a source of inspiration for us and all the others who are fighting against new forms of domination facilitated by the RSS-BJP. The struggle is an ideological one to get our freedom back. It has to be waged from the grassroots to the Parliament and that is going to be the true independence struggle for the people of India. The communists and Left will play the leading role in this as the Left is the consistent, uncompromising force fighting the rightwing-fascist assault.

* General Secretary of the Communist Party of India (CPI).