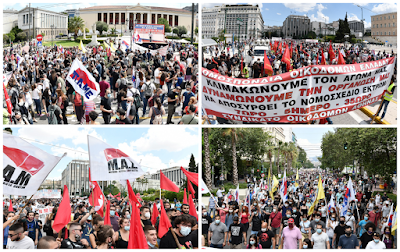 Under the slogan "Hands Off the 8-hour working day; no negotiations and no bazaars", workers, students, self-employed men and women, people of all ages gathered at Propylea, in downtown Athens, creating a huge river of demonstrators.

Speaking to reporters, the General Secretary of the Communist Party of Greece (KKE) Dimitris Koutsoumbas pointed out:

"No matter what the government does, this draft bill is condemned in the consciousness of the working people. The last word belongs to the workers, the young men and women who can understand their power and ruin it, they can send it where it belongs, in the dustbin. So that they will not live a slave's life in the 21st century".

The Trade Unions and the protesters vowed to step up their activity against the government's monstrosity by organizing new mobilizations on June 16th.