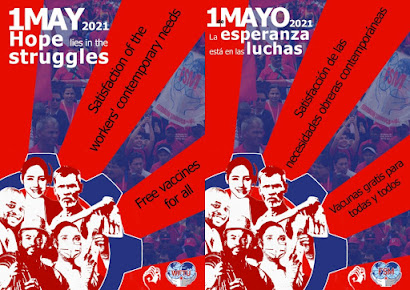 The World Federation of Trade Unions (WFTU), representing 105 million workers in 133 countries of the planet, sends a warm militant and internationalist greeting to the workers of the world, on the occasion of May Day 2021, this important day for the world working class. Each reflection, action and plan of the WFTU – especially in this difficult period for the workers and peoples of the world – has as its sole guide the interests of the working class. This 2021 will be a year of preparation for the world’s largest trade union event – the 18th World Trade Union Congress.

The COVID-19 pandemic profoundly marks the lives and actions of workers throughout the world. Our class mourned millions of deaths around the globe. Our movement found itself in unprecedented situations, demonstrating at the same time that the struggle of the class-oriented unions must encompass the whole of workers’ lives: hygiene and safety in the workplace, access to high-quality food and water, access to a safe education for our children, free, universal and public healthcare services for all.

In all capitalist states, the bourgeois class sought by all means to ensure its enormous profits, the profitability of business groups and monopolies in pandemic conditions. On the other hand, the workers saw that “only the working class can save the working class”, with the doctors and health personnel giving the battle with self-denial, at a time when capitalism neither had nor wanted to have a protection and defense plan of the people’s health.

At the same time, from the very start of the pandemic to the present day, the case of COVID-19 vaccines tragically highlights before our eyes what it means to develop, manufacture and distribute vaccines in the hands of pharmaceutical business groups- that is to say for the sake of profit and not with a view to satisfying people’s needs. We do not tolerate a situation where humanity counts its dead, where entire peoples don’t have access to the vaccines that already exist due to economic and geopolitical competition between states and business groups. This is one of the fundamental conclusions, one year after the outbreak of the pandemic.

What kind of popular need is covered by the existence of pharmaceutical business groups that take advantage of scientific research, develop vaccines and medicines  only if they have an immediate benefit and also with heavy state funding, which  produce based on investment performance and give the product to anyone who pays, which own patents and intellectual property?

The COVID-19 pandemic made the new international economic crisis more synchronized and deeper than that of 2008-2009. Although the bourgeois class and their well-paid servants present as the main cause of the crisis the fight against the coronavirus pandemic – which actually led to an abrupt reduction in productive activities, transports etc. – reality shows that even this crisis is a result of the operation mode of a system that has nothing more to contribute to humanity. The recession that already appeared in 2019 has highlighted the high degree of over-accumulation of capital; a capital which could not be recapitalized, invested, in order to guarantee a satisfactory profit.

It is now clear that even in this crisis, the enemies of the workers seek to shift the burden of the crisis onto the working class. Anti-worker laws are already being passed in a series of countries, a new attack is unleashed against workers’ achievements and new forms of work are being promoted that increase the degree of exploitation of the working class and limit trade union freedoms and people’s  rights.

At the same time, at the world level, it seems that old war zones are reactivated while new intra-imperialist conflicts threaten to start new wars, generalized or regional. Furthermore, the wars that are currently underway have not only claimed large numbers of human lives, but have also forced millions of people to leave their homes and flee to other countries, thus increasing waves of migrants and refugees.

The WFTU is proud of its affiliates and friends all over the world. During the previous period, there was not a single corner of the planet that was not marked by the action of the working class, with the WFTU affiliates being at the forefront of struggle, be it in the pandemic fronts or in the social and class struggles: from the great farmers’ strikes that shook all of India and the mobilizations of health personnel in Europe, through the struggles of the Costa Rican working class against the IMF and the mobilizations of Indonesian workers against the “Omnibus” law, up to the national action days in Peru for hygiene and safety measures, the struggles of retail workers in the United States and the mobilizations of art workers with the theaters’ occupation in France.

No matter how hard the bourgeois class tried to impose a “graveyard silence” on the working class, the true picture shows that we workers have disobeyed. The WFTU has been there, organizing and politicizing all these mobilizations as far as  possible.

With the current conditions of the deep economic crisis of capitalism and the intense competition between the different imperialist centers for the control of new markets, our most powerful weapons are INTERNATIONALISM and SOLIDARITY. No worker should be alone. We are on the side of heroic Cuba, we demand the immediate liberation of the Palestinians imprisoned in the dungeons of Israel, we express our solidarity with the peoples of Venezuela, Syria and Lebanon. Each people has the right to decide freely and democratically about their present and their future, without imperialist interference. We condemn NATO’s attempt to light new fires of war in Ukraine and the Black Sea.

Also on this May Day, the WFTU calls upon its affiliates to mobilize, take initiatives and celebrate actions inside and outside the workplaces, with our slogan for this year:

Satisfaction of the contemporary worker needs

Safe and free vaccines for everyone