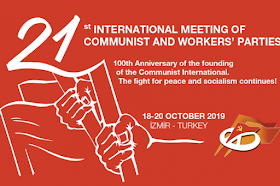 
The KKE delegation will collaborate with the comrades of the TKP in order to ensure the preparation and the success of the International Meeting. It must be reminded that this year's 21st IMCWP is the first one that is co-organized by two Communist Parties, under the subject "100th Anniversary of the founding of the Communist International. The fight for peace and socialism continues!".

More that 70 Communist Parties from 60 countries are going to participate in the International Meeting which takes place under complex and difficult circumstances due to the ongoing Turkish military operation in northeast Syria. Due to these conditions, the TKP decided to cancel a major gathering that would be held on October 19 in Izmir.