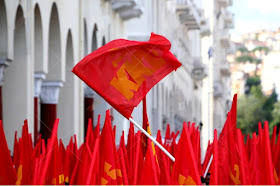 
In its statement, the KKE writes among other things: “It took just a few days for the US ambassador himself to confirm that the port of Thessaloniki has been transformed, not only into a base of reception but also a base of US military material, whenever the imperialists need it. He reminded once again that this is part of the “benefits of the Prespes Agreement”, confirming the fact that the deal was intended to strengthen even further the US and NATO influence in the Balkan region”.

The statement slams the government of SYRIZA, as well as the other bourgeois parties, for accepting and promoting this situation:

“The 'best preferred partner' (see SYRIZA government) is doing everything in its power to prove that it is the best promoter of the US in the Balkans and the broader region and there is no doubt on that. Of course, the known willing ones rush in every visit of the US ambassador. This time it was governor Ap. Tzitzikostas who gives his “best self” every time he meets the US ambassador – and he meets him very often recently. There are, of course, those who don't say a word about the transformation of the Thessaloniki port into a US-NATO base. Golden Dawn and other nationalists keep their mouth shut, because they are afraid of their bosses who hold the highest esteem for NATO and the USA”.

The KKE's statement points out that the transformation of Greece into a huge US-NATO basis of interventions and wars is a common aim of all the bourgeois political powers. “The experience has shown that NATO and the EU cannot guarantee the borders and sovereign rights of our country. On the contrary they consist factors of destabilization and war incidents”.

The Central Macedonia Party Organisation of the KKE mentions the wars of NATO and the USA in Yugoslavia, Syria, Iraq, Afghanistan and Libya and calls the region's workers and youth to join the anti-imperialist struggle against the presence of the euroatlantic murderers in the city's port. It writes:

“Today's intervention of the US ambassador at the Thessaloniki Port consists another opportunity for all the honest people of labour, who feel left and progressive, to overcome their dilemmas and join the struggle by the side of the KKE, so that we can make the difference that our country and people need. To stand by the side of the KKE in order to strengthen the struggle against the imperialist war. So that Greece will not be used as a foothold of the imperialists. So that the base of Souda will shut down and the Greek soldiers will return from missions abroad. To strengthen the struggle for the disengagement from NATO and the EU".

The KKE calls the workers, the people of the city, the youth, to fight against the transformation of the port of Thessaloniki into another basis of death for US-NATO imperialists.