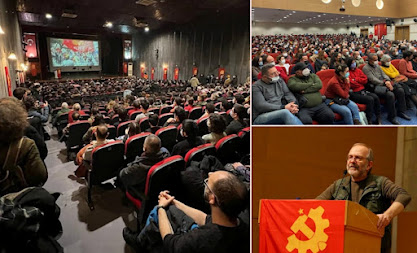 "The 21st century has not yet begun. Those who started the 20th century in 1917 will start it once again, be sure of that", underlined Okuyan among others and praised the bravery and patriotism of the TKP founders. "I am happy that the first cadres of the TKP were not cowardly, timid or treacherous, they were brave, patriotic, revolutionary and communist until the end”, he said.

It is reminded that TKP was established as a Comintern Party in Baku in 1920 with the influence of the October Revolution. During those years, in Turkey, there had been an anti-imperialist struggle, which had been growing as a bourgeoisie revolution, against the invaders. The initial Central Committee of TKP, including Mustafa Suphi and his 14 comrades, had departed to participate in the anti-imperialist struggle and seek the opportunities of the socialist revolution. Yet, they were killed on 29th January 1921 on the Black Sea coasts soon after their arrival at Anatolia.