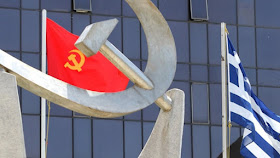 In a statement published on 902 portal, the Press Bureau of the CC of the Communist Party of Greece (KKE) condemns the U.S-inspired coup in Bolivia and calls for international solidarity towards the people of Bolivia and Latin America.

You can read here other statements from Communist and Workers Parties.

The statement of the KKE reads:


"The KKE condemns the Coup in Bolivia and the overthrow of the elected President Evo Morales, which was organized by a part of the domestic oligarchy, with the intervention of american imperialism in collaboration with the Organization of American States which fulfills the role of "gendarmerie" in the region, with the explicit use of the Army and Police.

The KKE denounces the arrests and persecutions against popular forces that resist to the Coup, the vandalisms in the embassy of Venezuela and the anti-cuban frenzy.

The KKE expresses its solidarity to the people of Bolivia and, once again, points out that the developments in Bolivia, in Venezuela, in Chile and the other countries of Latin America is a matter of their people, of the struggle of the workers-people's movements, of the trade unions and the other popular organizations which have the entitlement to assert and impose their rights. In order to engrave their way against the imperialist interventions and capitalist exploitation which is the source of the sharpening of the people's problems, the "womb" of poverty, unemployment, wars and repression of the people's will through military coups."